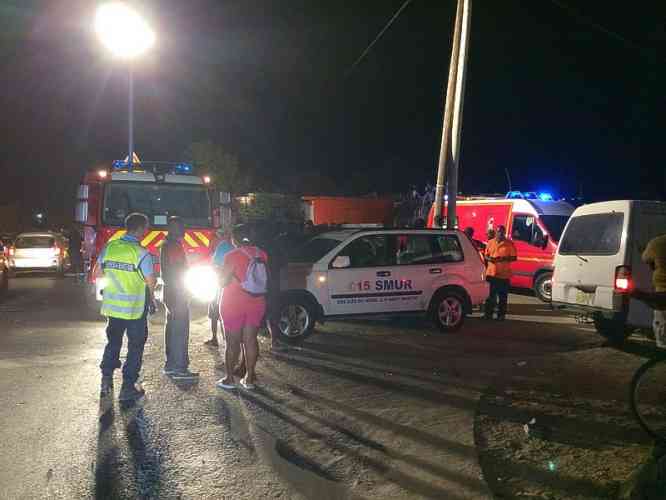 The accident scene on the RN7 in French Quarter on Tuesday evening. (Robert Luckock photo)

MARIGOT–St. Martin is reeling from the shock of losing two young men in one day to fatal scooter accidents, both of which occurred in French Quarter on Tuesday.

The first fatal accident took place on the RN7 between Orient Bay and French Quarter late Tuesday morning when Christopher “Tough Head” Glasgow (25), a resident of French Quarter who was identified by bystanders at the scene, collided head-on with a delivery truck on his scooter.

Gendarmerie Captain Arnaud Gerard explained the victim was travelling toward French Quarter overtaking vehicles at speed but failed to notice in time an ice delivery truck that was turning left into the Golden Star Supermarket car park, resulting in the collision.

Capitaine Gerard said the victim was riding a T-Max scooter and there was no evidence he was wearing a helmet. It was understood the victim died instantly.

The second fatal accident occurred also on the RN7 at the Belle Plaine end of French Quarter at 7:15pm. Capitaine Gerard was again on duty. He explained the accident took place in similar circumstances to the first one, involving speeding and overtaking. In the latter case, the victim’s scooter collided with a white van that had begun to make a turn off the main road.

A very large crowd turned out on the road to observe emergency medical services try to save the young man’s life. Capitaine Gerard confirmed that the victim had died from his injuries at the scene.

Gendarmes and Territorial Police controlling the crowd were diverted temporarily to stop a fight that had broken out between a man and a woman, but reportedly this was not connected to the accident. Due to this distraction it was not possible to obtain more details on the accident.

A bystander identified the victim as Jordan Illidge from Grand Case, but this could not be confirmed by press time.