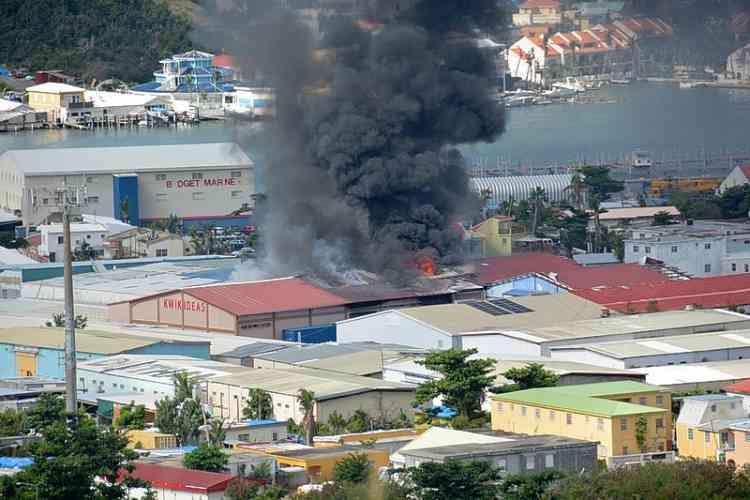 PHILIPSBURG–A major fire broke out at Kam’s Distributors at 10:25am Tuesday.
Investigating officers learnt that the fire started while a contractor was doing welding-repairs on the roof of Jobco Plaza. As a result of this fire the entire interior of Kam’s Distributors was engulfed in flames.

The fire caused a large black cloud of smoke that could have been seen from long distances.

Police spokesman Chief Inspector Ricardo Henson said in a press release on Tuesday afternoon that the fire had broken out in the warehouse complex at Jobco Plaza and Kam’s Distributors. The two businesses are located next to each other.

“On the scene the emergency services noticed that a fire had broken out at Jobco Plaza and spread into Kam’s Distributors. Police closed off streets in the area, diverted traffic and kept the public at a safe distance for the Fire Department to put the fire out.

“Within short the Fire Department had fire under control and there were no more chances for the fire to spread. No one was injured during the fire. At approximately 3:00pm the roads in the area were again open to traffic,” stated Henson.

The Fire Department responded with four fire trucks and two water trucks to a fire in a warehouse complex in Cole Bay. The trucks arrived on the scene around 10.30am shortly after receiving the fire alarm. The warehouse belonged to a business and the building contained non-alcoholic beverages, lard (cooking oil), paper and Styrofoam containers. Residents and businesses in the surrounding area were alerted by the police to close windows and doors.

The Fire Department said a lot of water was required to bring the fire under control. Fire personnel used fire hydrants in the immediate area as well as two water trucks that it received from The Netherlands after the passing of Hurricane Irma that now form part of the Department’s firefighting assets.

Fire crews remained at the scene to extinguish hot spots within the warehouse. The Department was assisted by the Ministry of Public Housing, Spatial Planning, Environment and Infrastructure Management (VROMI) with heavy equipment, which was used to clear burnt debris within the warehouse to reach hotspots.

Firefighters were not able to enter the warehouse because one of the floors within the structure had partially collapsed and, due to the heat, cracks started to form in the outer walls with the high risk of a possible collapse, according to the Fire Department.
While battling this blaze the Fire Department received another call for an electrical fire at Paradise Mall in Cole Bay. A fire truck and crew responded from the Cay Hill Fire Station and this fire was promptly extinguished.

Prime Minister Leona Romeo-Marlin and Minister of Justice Cornelius de Weever visited the scene of the fire in Cole Bay on Tuesday night to get a first-hand view of the situation.
The fire officers’ safety was of concern to the Prime Minister, as she was informed that a floor in the building had collapsed. “Material items and structures can be replaced, but possible loss of life is something that must be prevented at all cost. Safety comes first,” she said on Tuesday.

Fire Chief Clive Richardson thanked the fire crews, police and Ministry VROMI for the assistance they rendered which resulted in preventing any loss of life and keeping the fires contained, thereby limiting any damage to other nearby businesses.