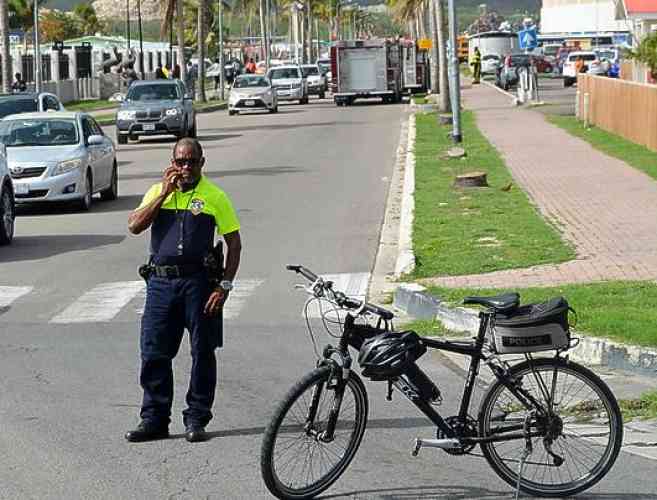 POND ISLAND–Officers of the Police Force of St. Maarten arrested a woman regarding a bomb threat at the office of telecommunications company TelEm on Pond Island on Wednesday. The woman, whose identity was not made public, was taken into custody pending further investigation, the police said early Wednesday evening.

According to reliable sources, the woman made the threat because she reportedly was displeased with the level of customer service provided by the telecommunications company.
The woman could be easily tracked down by the police as she had made her call from a landline telephone.

The police dispatch received a call from TelEm at approximately 1:50pm stating they had received an anonymous call from an unknown person to their helpdesk making claims of a possible bomb threat in the TelEm building and its vicinity.
The police dispatch immediately directed several police patrols to the TelEm building to investigate what was going on.

“The Police Department does not take bomb threats, or any other threats involving human life, lightly and decided to evacuate the TelEm building, the Government Administration Building and persons living in the immediate area,” Police spokesman Chief Inspector Ricardo Henson said.

Traffic on the Soualiga Boulevard was diverted in other directions while police investigators were trying to locate the caller. Members of the Fire Department and paramedics were on the scene in case they were called to perform their duties.

For safety reasons the Police Department asked persons to stay clear from the area until everything went back to normal. The search in connection with the bomb threat at the TelEm building was called off at 4:45pm. The Police said Wednesday evening that more details about the investigation were not available at this time.

False bomb threats were made at Princess Juliana International Airport in 2015 and 2017. The Prosecutor’s Office called for a prison sentence of 18 months, a US $10,000 fine and payment of damages for a man whose two bomb threats rocked the airport, severely disrupted traffic and interrupted the regular duties of the police, Fire Department and other rescue services on November 22, 2015. In April 2016, the Court of First Instance sentenced the man to 12 months unconditional for making these two bomb threats.