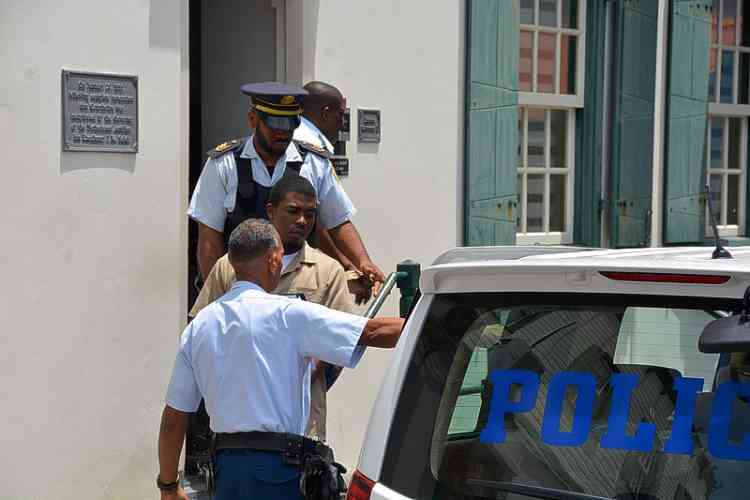 Jamali Naseem Rowendie Hodge escorted into a police vehicle after the June 19 court hearing in his case. (File photo)

PHILIPSBURG–The Court of First Instance sentenced a man to fourteen years in prison as he was found guilty of the manslaughter of a two-year-old toddler and attempted manslaughter of three other persons who were injured.

The child was run over by a white Kia Picanto driven at high speed into a group of seven persons who were on the sidewalk outside a house on Passion Fruit Road in Retreat Estate around 10:21am January 13.

The child, who was riding a plastic car on the sidewalk, died on the spot of multiple trauma. Three injured persons were transported to St. Maarten Medical Center (SMMC) for injuries sustained during the incident. The Court awarded the victims US $7,400 in financial compensation.

The driver of the car, Jamali Naseem Rowendie Hodge (20), stood trial on murder and manslaughter charges, for which the Prosecutor had requested an 18-year prison sentence during the June 19 hearing.

After an altercation with one of the youngsters in the group over the theft of a motorcycle, Hodge drove his vehicle into the group of young men who were at the entrance gate to a home. Included in this group was the toddler.

Investigations of the vehicle revealed that the engine was in first gear, the steering worked properly, the view through the windshield was good and not obstructed by anything, all four tyres were in good condition, and the brakes were functioning.

Hodge had stated that two days before the incident he had stolen a motorcycle that belonged to one of men in the group of seven. On January 13, he met the man’s brother in the street and told him that he had wanted to teach his brother a lesson because he “always steals bikes.”

A fight followed during which Hodge sustained a number of blows. He told the Court that he had been angry, but that he had not had a plan when he drove into Passion Fruit Road. He said he had been speeding and was angry.

He claimed that he had been driving so fast that he had lost control of the vehicle and had crashed his car into the group of people, but had not done so on purpose.

The Court rejected this scenario, as it did not find any circumstance that could have led to the defendant losing control of his vehicle. Based on all the evidence, the Judge found manslaughter and triple attempted manslaughter proven.

“After an earlier fight, the defendant drove to the house of the person he had just fought with and, having arrived there, deliberately drove his car at considerable speed into an unsuspecting group of people who were standing in front of the house. These people were trapped between the approaching car and the concrete wall behind them.

“A number of people managed to jump out of harm’s way, but not everyone managed to do that, and several persons were (severely) injured. These injuries, however annoying they may be for the victims, are no comparison with the terrible fact that a two-year-old boy who was playing in his toy car in the same location also landed between the car and the wall, and died of his injuries on the spot,” the judge stated in the verdict.

The judge said that in driving his car into a group of persons the defendant had accepted the possibility that people would be killed. The fact that the suspect claimed he had not seen the child does not change that, according to the Court, as the toddler had been a member of the group at which the defendant had steered his vehicle.

The Court held it against the defendant that his “ill-considered” actions had such “disastrous” consequences.

“Through his actions, the defendant took the life of a little boy who had his whole life before him, but was only allowed to live for two years. The accused inflicted indescribable and irreparable grief on the parents and other family members and friends. They cannot see their son growing up and they will have to bear that unbearable loss for the rest of their lives,” the judge said.

Hodge’s lawyer Sjamira Roseburg had pleaded with the Court to declare the Prosecutor’s case against her client inadmissible, or to dismiss him from all prosecution because he had acted in self-defence and had been overpowered by emotions.

The lawyer had also claimed that the statements provided by the victims and witnesses of the incident could not be used as evidence, as these were “unreliable” and “inconsistent.”

However, the Court rejected these pleadings, as it found the statements consistent and complete, and supported by “objective and verifiable” evidence from different sources, which were largely confirmed by the defendant’s own statements, the judge stated.

The defendant immediately filed for appeal.