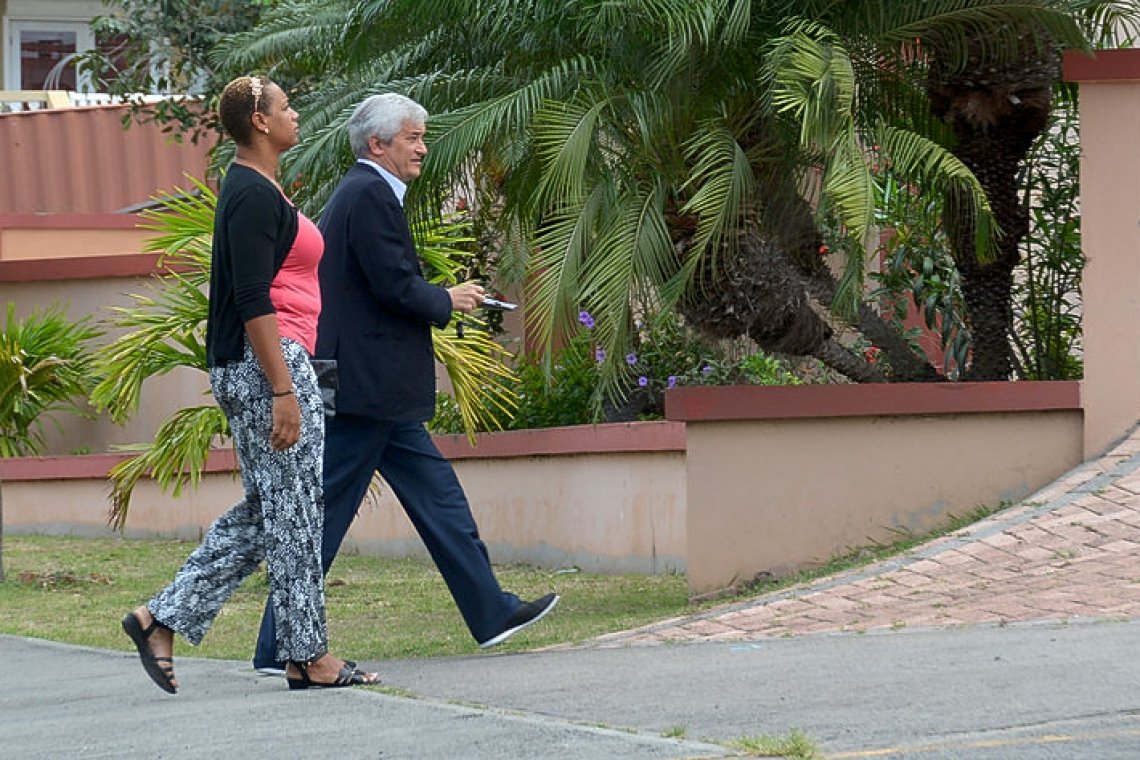 BELAIR–The Prosecutor’s Office demanded a prison sentence of six years and six months for former parliamentarian Theodore Heyliger, who is one of the main suspects in the “Larimar” case about corruption in St. Maarten. The prosecutor formulated his demand against Heyliger and three co-suspects Wednesday during the third day of hearings at the Belair Community Centre.

The Larimar case concerns payments of bribes in connection with several major construction projects, among them the causeway bridge, and the laundering of large amounts of money.

On Monday, the Prosecutor’s Office already presented its demand for Dutch consultant R.M., the crown witness in this case, who in the eyes of the Prosecution should be imprisoned for three years. In both Heyliger’s and M.’s cases the prosecutor also announced dispossession claims.

Suspects R.E. and G.P., who both allegedly participated in a money-laundering operation in the sale of real estate described as the “Mullen” property, are both facing 140 hours of community service.

In addition, the Prosecutor’s Office, the Kingdom Detective Cooperation Team RST and the Anti-Corruption Task Force also investigated the long-standing and structural relationship that existed between Windward Roads and consultant M., who was the liaison between construction companies and politicians in St. Maarten, Heyliger among them.

In exchange for his mediation in the awarding of government projects, WWR paid M. a monthly fee. He also received a percentage of the contract price. M. told detectives that he and Heyliger had shared the percentage according to a fixed distribution key of two-thirds for Heyliger and one-third for him.

The current Code of Criminal Procedure of St. Maarten has no regulation for the use of a crown witness, but in the Prosecutor’s Office’s view this is no obstacle, as the use of crown witnesses in criminal cases is recognised and permitted in case law of the High Court of the Netherlands.

According to the prosecutor, this case aims at deep-rooted corruption. He said that without witnesses providing statements the truth in these matters cannot be uncovered, unless with great difficulty. “Money flows are shielded by using foreign offshores and cash payments,” the prosecutor explained.

He said the importance of revealing the truth about corruption cases in St. Maarten can “hardly” be overestimated.

“Unfortunately, self-enrichment by politicians and administrators is not an unknown phenomenon. Not only does it lead to significant financial damage to the country, some among the population also seem to accept this type of behaviour as an inevitable phenomenon. Politicians and administrators who are being tackled defend themselves strongly against criminal charges and support each other in this.”

In the prosecutor’s opinion, M.’s statements are a first, and therefore essential, contribution to breaking this pattern.

The prosecutor also addressed the public perception that in this case “real” St. Maarteners are being treated unfairly and harshly, while there is more leniency towards so-called “Dutchies.” He said this perception is incorrect. He pointed out that Heyliger is not the only one paying a price for the alleged crimes, which were committed between 2004 and February 2019, and which allegedly yielded the former parliamentarian some US $4 million.

“The Dutch construction companies involved in this case do not escape prosecution. The Prosecutor’s Office and the Fiscal Intelligence and Investigation Service (FIOD) in the Netherlands have launched an investigation into VolkerWessels and the Dutch parent company of WWR, Janssen de Jong.” The statements of crown witness M. also play an important role in the investigation in the Netherlands, dubbed “Frozen.”

Also, WWR and its parent company will not get away with a “slap on the wrist,” but will have to pay a  penalty of $2 million in the form of a sewerage project in various districts on the island, the prosecutor stated.

“Although the crown witness has been granted a lesser sentence, he is still facing a three-year prison term. The deprivation of the crown witness’ unlawfully acquired assets may be deemed modest. On the other hand, he must relinquish real estate and the life he had built up [in St. Maarten – Ed.],” the Prosecutor said in defending the deal.

“He [Heyliger] can be seen as the driving force behind a number of developments and construction projects that are important to St. Maarten, such as the expansion of cruise tourism on the island and the construction of the causeway bridge.

“However, this is and should not be an excuse for corruption. Certainly not, if this corruption means that the taxpayer pays millions more for government projects so that H. can also fill his own pockets. As a result, the people’s trust in the public administration of St. Maarten has been violated,” the Prosecutor stated.

The Prosecutor holds former WWR director B. responsible for the steady money flow between M. and Heyliger. However, in formulating the demand it was taken into consideration that B. had not financially profited from the scheme himself and had cooperated with the investigation and provided incriminating statements. Therefore, the prosecutor said he had lowered his demand from 18 to 12 months.

The Prosecutor said that suspects E. and P. had not, or barely, benefited from their money-laundering efforts in connection with the Mullen property. Considering their limited role in the scheme, the prosecutor recommended community service instead of a (conditional) prison sentence.

The case will continue, today, Thursday, with the lawyers’ pleadings in the cases of E. and P.