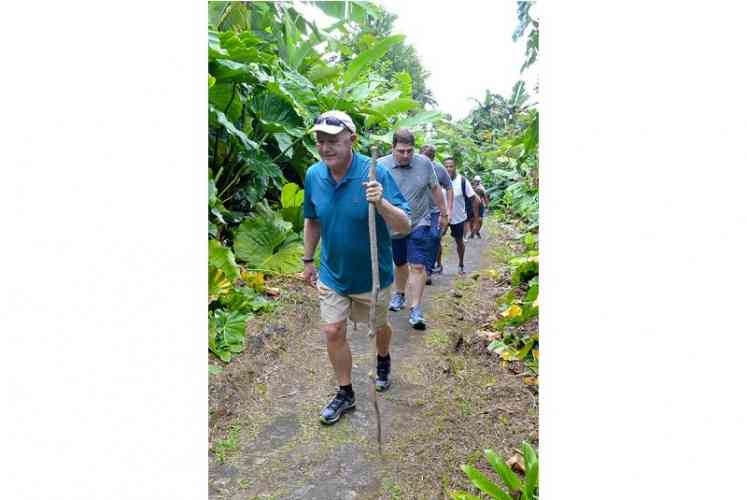 US Ambassador to the Netherlands Pete Hoekstra (front) as he, his delegation, and representatives of the public entity Saba walk up Saba’s Mt. Scenery on Thursday morning, November 14.

US Ambassador Pete Hoekstra (left) visited the landfill and recycling facility where he received information from Commissioner Bruce Zagers (right), and Andrew and Joan Cadwell of Cadwell Inc, the US company that is removing all recyclables from Saba.

US Ambassador Pete Hoekstra (left) inside the recycling facility with landfill manager Arnold Hassell at right and Head of Public Works Russell Thielman in the centre.

SABA–United States Ambassador to the Netherlands Pete Hoekstra visited Saba on Thursday, November 14. He met with local authorities, climbed Mt. Scenery, the highest point in the Dutch Kingdom, and went to the landfill to be informed about the successful recycling project.

Hoekstra was very positive about his first-ever visit to Saba. This was not his first visit to the Dutch Caribbean, as he has already been to Curaçao, Aruba and St. Maarten. His visit to Saba was historic in the sense that he was the first US Ambassador to climb Mt. Scenery. He did so shortly after arriving on Saba on the first flight.

“It was a hard hike. The nature is gorgeous. Saba is a beautiful island with the white houses and the red roofs. And I had a thrilling entry into this beautiful island, landing at such a short runway,” Hoekstra said at the end of his one-day visit.

He said the island has a lot of potential, depending on how much local authorities want it to grow. “I can understand that they want the right kind of growth so Saba can stay Saba, and not lose its authenticity. Generally, they share the same vision, which is conducive.” He said he was impressed by the project to clean up the landfill, the recycling facility, and the plans to build a new harbour. “These are all major projects that are positive for the community.”

At the landfill, Hoekstra, his wife Diane and his delegation that includes staff from the US Consulate General in Willemstad, received information about the waste management and recycling process from Commissioner Bruce Zagers, landfill manager Arnold Hassell and Head of Public Works Russell Thielman.

Andrew Cadwell of Cadwell Inc., the US company that is removing all recyclables from Saba, shared information on the project to get metal, aluminium, glass, plastics, tires and other recyclables off the island.

Cadwell told the Ambassador that the first batch of scrap metal has already been removed and shipped to Puerto Rico for processing after being cleaned in Saba first. He said that all containers filled with recyclables will be shipped off and the intention is to keep doing so, to prevent a build-up of stored recyclables in Saba.

Hoekstra and his delegation left Saba on the last flight and will visit St. Eustatius on Friday, November 15.