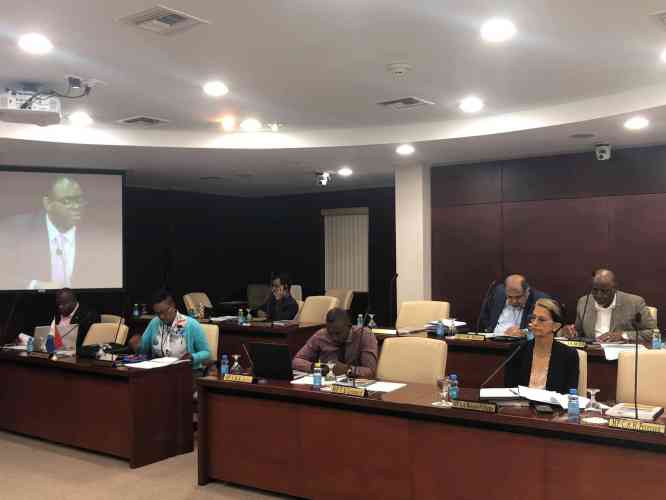 The company, Residential World, approached the Parliament’s Committee for Public Housing, Spatial Planning, Environment and Infrastructure VROMI, because government is moving too slowly on the project, according to company representative Fidel Jenkins (Seen left on TV screen).

The company, Residential World, approached the Parliament’s Committee for Public Housing, Spatial Planning, Environment and Infrastructure VROMI, because government is moving too slowly on the project, according to company representative Fidel Jenkins. Jenkins has only met so far with VROMI Secretary-General Louis Brown, who he claims is slow on communication.

Jenkins, the company chairman and president, who was the company’s only representative present at the committee meeting, said the self-sustaining houses will require a workforce of some 3,000 people. Of those, some 2,000 people will be based in New York where the containers will be converted into housing. Those will be shipped via Canada back down to Fort Lauderdale onwards to St. Maarten via Tropical Shipping.

The other 1,000 people will be needed locally to assemble the container houses that will be fully furnished with waterproof solar-panel roofs. The units will have ample indoor and outdoor spaces and will be hurricane-resistant up to a category four storm.

Should a monster storm like Hurricane Irma ever threaten again, the units can be released from their anchors “and put on a barge and taken out to sea away from the storm and returned after,” said Jenkins.

He said the housing model was developed specifically for St. Maarten after this company saw the devastation of Irma in September 2017.

The company has financing for the project, for which land still needs to be procured. Government, he told Members of Parliament, does not need to put any money down and will only have to start paying for the houses after the last container unit is installed.

Jenkins left open-ended the question of how government can finance this housing project. He proposed a drastic increase in the passenger head tax for cruise ships. He suggested an amount of $40. This drew sharp reactions from MPs who told him that would not be such an easy change due to resistance from the cruise industry.

Jenkins told MPs he believes that cruise passengers and other island visitors are not against paying more to visit and that resistance might be from the companies rather than passengers.

“I don’t mind having to pay 100 dollars more to visit. … St. Maarten is the jewel of the Caribbean. … Where do people from the United States want to visit? It’s not St. Lucia. It’s not even St. Thomas. It’s St. Maarten,” he said.

Residential World has not executed any similar project anywhere else. Limited information about the company is available on its website residentialworld.tv other than what appear to be pitches for specialty housing projects. The only press reference to the company is about making a $3 million agreement with an art gallery in 2015.