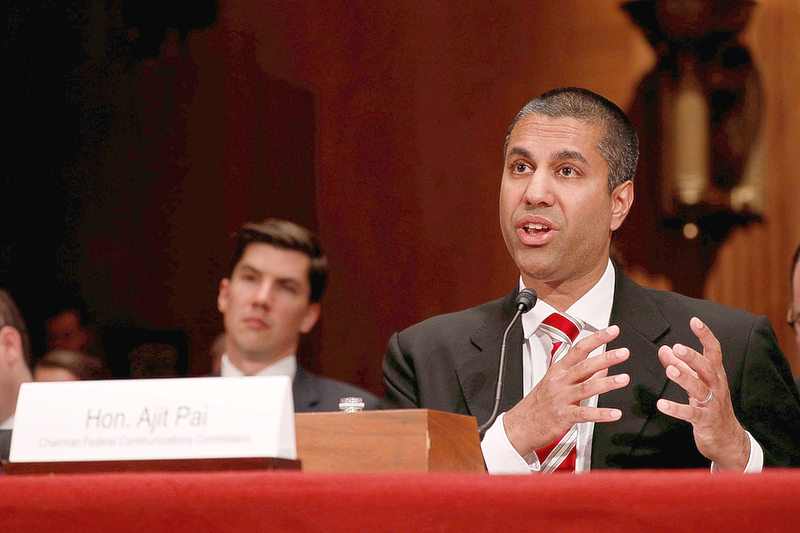 WASHINGTON–The head of the U.S. Federal Communications Commission unveiled plans on Tuesday to scrap landmark 2015 rules intended to ensure a free and open internet, moving to give broadband service providers sweeping power over what content consumers can access.

FCC Chairman Ajit Pai, a Republican appointed by President Donald Trump in January, said the regulatory agency will vote at a Dec. 14 meeting on his plan to rescind the so-called net neutrality rules championed by Democratic former President Barack Obama that treated internet service providers like public utilities.
Pai said the action would remove heavy-handed internet regulations. Critics said it would let internet service providers give preferential treatment to some sites and apps and allow them to favour their own digital content.
The Obama-era rules, aimed at giving consumers equal access to web content, barred broadband providers from blocking or slowing down access to content or charging consumers more for certain content. The FCC action was a clear victory for big internet service providers such as AT&T Inc, Comcast Corp and Verizon Communications Inc, which favored a repeal.
Companies including Google parent Alphabet Inc, Facebook Inc, online shopping company Amazon and video streaming service Netflix Inc had urged Pai not to rescind the rules.
With three Republican and two Democratic commissioners, the FCC is all but certain to approve the repeal. Trump, a Republican, expressed his opposition to net neutrality in 2014 before the regulations were even implemented, calling it a “power grab” by Obama.
Pai said his proposal would prevent state and local governments from creating their own net neutrality rules because internet service is “inherently an interstate service.” The preemption is most likely to handcuff Democratic-governed states and localities that could have considered their own plans to protect consumers’ equal access to internet content.
“The FCC will no longer be in the business of micromanaging business models and preemptively prohibiting services and applications and products that could be pro-competitive,” Pai said in an interview, adding that the Obama administration had sought to pick winners and losers.
“We should simply set rules of the road that let companies of all kinds in every sector compete and let consumers decide who wins and loses,” Pai added.
FCC Commissioner Jessica Rosenworcel, a Democrat, said Pai’s proposal “hands broadband providers the power to decide what voices to amplify, which sites we can visit, what connections we can make, and what communities we create. It throttles access, stalls opportunity and censors content.”
Tom Wheeler, who headed the FCC under Obama and advocated for the net neutrality rules, called the planned repeal “a shameful sham and sellout. Even for this FCC and its leadership, this proposal raises hypocrisy to new heights.”