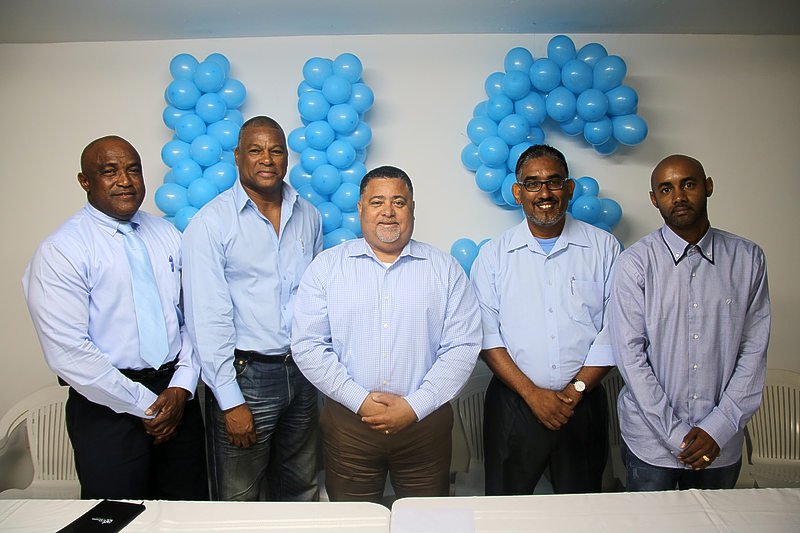 PHILIPSBURG–Four candidates were rolled out by the United St. Maarten Party (US Party) on Friday at the party’s headquarters on the L.B. Scot Road. Raphael Brooks, Martin Wilson, Benjamin Kelly and Chanel Brownbill are the new additions to the party slate, according to leader of the party Frans Richardson.

The Member of Parliament (MP) introduced the four to members of the media in the presence of board members and their family members. Each candidate shared the reason for running on the US slate. Kelly and Brownbill come from the United People (UP) party, while the two others are new to the political arena.

Brooks mentioned the six month labour contract as an issue he would be focusing on. “Due to the fact that hotels, restaurants and casinos in particular are very sensitive to international competition and very labour-intensive, the six month labour contract must be looked at in a broad manner and include the perspectives of all who would be affected. This is an issue close to my heart and the abuse, I believe, can be addressed once I am elected.”

Wilson said, “My vision for St. Maarten is to see everybody living together in harmony and being able to enjoy the best of life. This can be achieved if we cater for the people of St. Maarten from birth to the old person who has given their valuable contribution to the development of this country. I am eager to apply my broad knowledge in various aspects of life in general to the campaign of the United St. Maarten Party.”

Kelly stated, “St. Maarten needs strong leaders who come to the table with solutions, not ideas. I look forward to being a strong voice on US party, and will represent our entire St. Maarten, including our youth, our seniors, our diverse ethnic communities and neighbourhoods.”

“As a long-time staff of Parliament, this experience has given me a deep understanding of how Parliament operates. It has prepared me with a solid background for the job as a Parliamentarian. This is my second time running for the position, and now more than ever, I think it’s time, it’s time to bring in new blood, new faces, progressive thinking, and most importantly, progressive action.”

He was a candidate on the UP party during the last elections and received more than 100 votes.

He said that he intends to work harder and get more votes in order to get elected. “My family was split last elections, as some voted for my old party while others voted for the US. Now I can get all the votes,” stated Brownbill. US plans to have 23 candidates for the upcoming elections and will launch more candidates in the coming weeks.