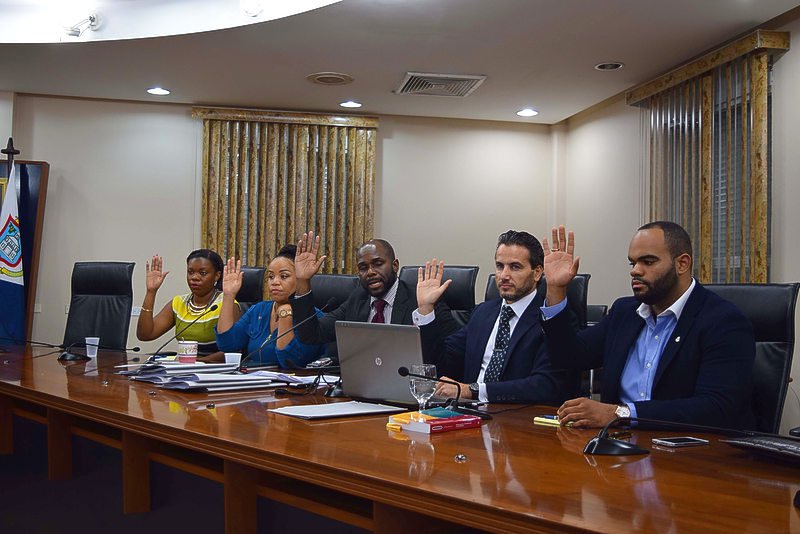 PHILIPSBURG–Whether United St. Maarten Party (US Party) will have a number 15 candidate on its slate come Parliamentary Election Day on September 26 is now in the hands of the Court of First Instance.  The Court has a maximum of 14 days to render a decision on the petition to readmit the barred candidate.

The Main Voting Bureau voted unanimously in its public sitting on Friday to remove blue party’s candidate, because his name did not match the one submitted on Nomination Day, August 8, to the Voting Bureau.

US Party tried to swap the number 15 candidate Curtis Thomas with a new candidate Dennis Williams, a move that is not allowed under the Electoral Regulation.

In anticipation of the striking off of the candidate, US Party filed a petition to the Court on Thursday afternoon to get the Voting Bureau’s decision annulled and not got to the polls with number 15 blank.

US Party handed in a list of 23 candidates to the Voting Bureau with the number 15 candidate noted as “Curtis Thomas.” Thomas has contested the elections with the party in 2014, but failed to gain a seat in the current Parliament.

Missing from the package of required documents given to the Bureau was Thomas’ declaration of candidacy. This document, required by the Electoral Law, must be signed by the candidate. The absence of the declaration was discovered when the Voting Bureau say in a closed session on August 12.

The party was informed of the omission on August 15 and was given three days to correct this and other errors with supporting documents. The party corrected all errors as required by law, but went a step forward. Instead of submitting the declaration for Thomas, the name of a new candidate – Dennis Williams – was submitted with supporting documents.

The replacement of a candidate is not permitted by law. Voting Bureau Chairman Jason Rogers told The Daily Herald after Friday’s session the Electoral Law stipulates when the list of candidates must be submitted and that was on decreed Nomination Day of August 8 for the upcoming elections. No replacement or substitution of candidates is allowed.

US Party leader Member of Parliament (MP) Frans Richardson stated in a press release issued after the Voting Bureau held its session that “due to an administrative oversight and several unforeseen circumstances up to the deadline to submit the list of candidates, one change wasn’t made on one piece of documentation.”

The initial candidate “was stuck in transit off-island and could not get back in time to sign his declaration or issue it in writing from where he was.  As such, the party moved hastily to make the necessary changes.  It was during this process the administrative error occurred,” said Richardson.

The party said it has “good grounds” to challenge the decision of the Voting Bureau in Court, because the replacement candidate has signed the personal declaration and the candidate’s name appears on all, but one document – the original list of candidates.

Even if the party wants to keep the original candidate Thomas, because he has since returned to the island, this also would not be allowed by law, because he cannot sign and submit the declaration at this stage in the process.

Richardson is of the opinion if a party is given the opportunity to make corrections to documentation as prescribed by law, this should also include the original list if a candidate on this original list has not signed the supporting documents or verified that he or she is indeed running by signing the personal declaration.

The party contended that the required documents and personal declaration that the replacement candidate has signed “should supersede the mere mention of a name on a list without any signed supporting documents.”

Coincidentally, the list of candidates sent out to the press by the party after the submission has number 15 listed as Dennis Williams and not Curtis Thomas as such media reports about the slate stated Williams as the candidate at number 15. Thomas’ name on the original slate was not known until it was announced by the Voting Bureau.

The Voting Bureau also unanimously decided to leave the number 15 slot on the party slate blank, instead of pushing up the remaining candidates starting with putting the number 16 candidate.

The electoral law is “silent” on how to proceed when faced with such as case of a blank spot. Rogers said the law in the Netherlands allows for the candidates to be renumbered to fill the gap, but the St. Maarten law does not address this. “We have decided the numbers will remain.”

Following Friday’s sitting of the Bureau, US Party had two days within which to file a petition with the Court. Those two days would have ended on Monday. However, the party was aware of the Voting Bureau pending decision to reject the candidate number 15 and move to Court a day before the sitting.

The Voting Bureau has accepted the slate of US Party without candidates 15. Similarly, the slates as submitted by the other eight parties in the election were unanimously accepted by the Voting Bureau. All parties have errors in their submitted documents and remedied these within the legally stipulated time to get on the September 26 ballot.

The lists were handled and voted on in the order they were submitted to the Voting Bureau on August 8. Bureau members showed their acceptance of the list by a show of hands.

All parties except PPA, DP and US Party had representatives in attendance at the meeting held on A.C. Wathey Legislative Hall.