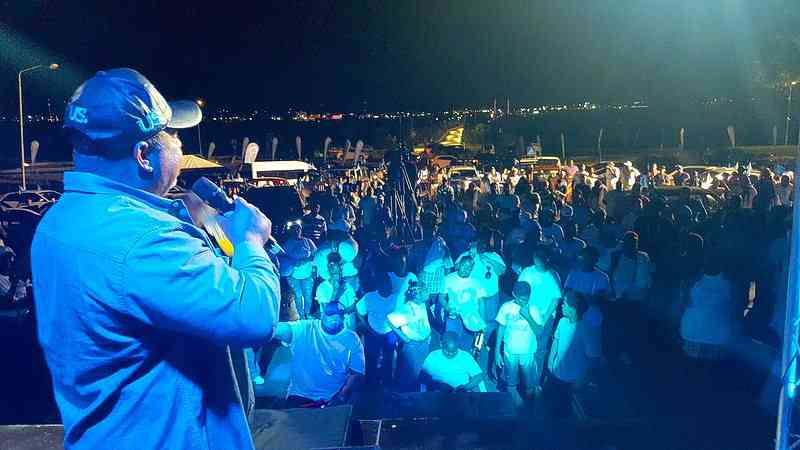 COLE BAY–With the principles of family and keeping a better quality of life for the people as priority, United St. Maarten Party (US Party) leader MP Frans Richardson asked his supporters on Saturday night to once again believe in US Party by giving it the opportunity to govern.

US Party held its final public meeting for the 2018 Parliamentary election in Cole Bay and focused on the party’s achievements in only nine months of governing and on its leader’s recent release from 10 days incarceration in the final days of the campaign.

Richardson said “it was good to be back” on the campaign trail and amongst “my people.”

“I am not going to get into the details of what is happening with me. That time will come. And the people will know and see the truth. But like I said earlier in the day on radio, the leaders of the country will have to face and make crucial decisions about the judicial process in this country,” he said.

He went on to thank the public for its overwhelming support for him and his family. Earlier in the day Richardson maintained his innocence on 95.9FM and said he will face his challenges with confidence.

He also used much of his speaking time on stage to recognise the young candidates on the US Party list, most notably Rolando Brison, Valya Lake-Pantophlet and Lyndon Lewis who, along with the entire team, he called the future of US Party. He also introduced the party board, advisory officials and the party’s PR/media wing, and called this group the “backbone of what we stand for.”

He said the party continues to believe in giving young adults opportunities to lead in St. Maarten. Even though some of those young adults have let the party down in the past and jumped ship for personal gain, he continued, “We will not cast a shadow over all bright young people who want to step up and lead. We will continue to embrace them, and I am very proud of the young candidates we have assembled.”

Richardson said US Party was built on principles of family and approaches governing the same way. He said elected officials and political parties must take care of the St. Maarten family, or rather “the people of St. Maarten and their families.”

“Take care of each other, look out for one another, do what is right for the entire circle, defend each other against outside threats, focus on priorities that, if achieved, will benefit all. That is how the USP has operated internally and that is always how the USP has approached governing,” Richardson said. “We have always worked for our people; our record is clear. We hope you give us the opportunity to do so again.”

Richardson also called former Ministers Rafael Boasman and Mellissa Arrindell-Doncher on stage to thank them for the work they did as US Party Ministers of Justice and Tourism, Economic Affairs, Transportation and Telecommunication (TEATT) respectively.

“There is nobody who can say with a straight face that USP was not working. Hurricane Irma struck, and some political parties saw the opportunity to manipulate, connive, lie and proceed to break government. The government was doing good work. And I want to commend these two Ministers for the work they were doing. If we had four years, so much would have come to fruition,” he said.

He asked the people of St. Maarten not to reward ship-jumpers and the people who threw down government in the aftermath of Irma.