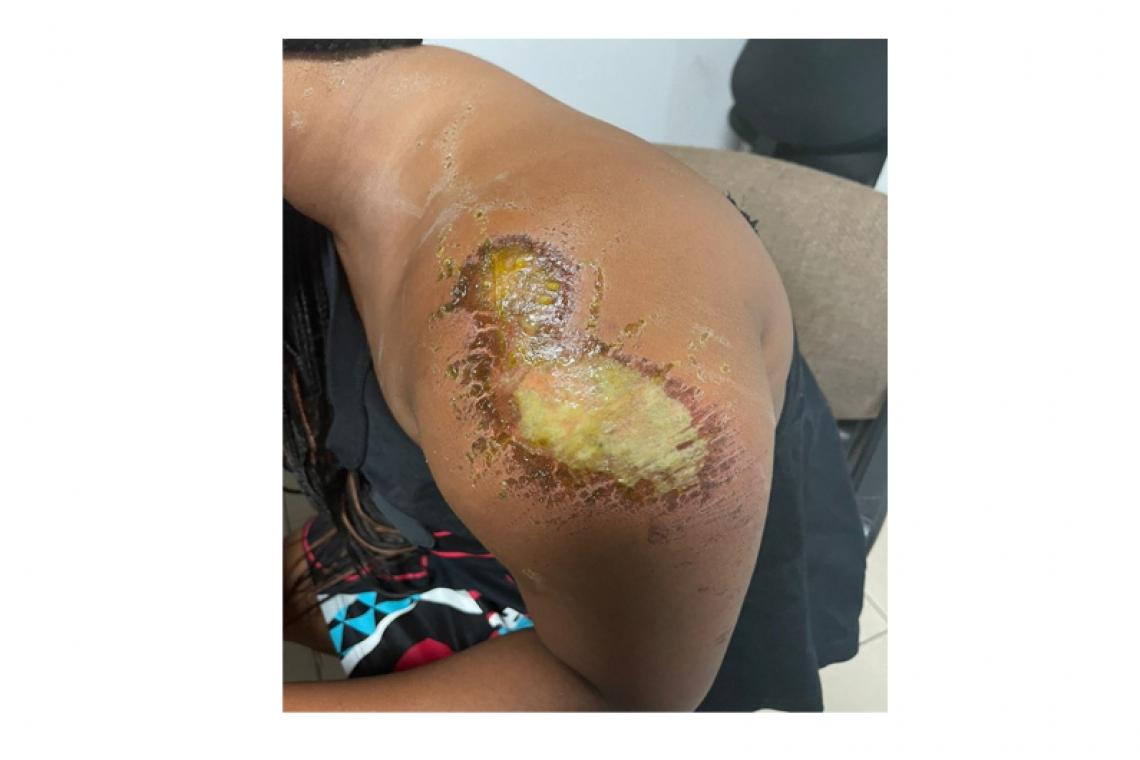 The woman’s infected shoulder on Monday.

PHILIPSBURG–An American man and woman are having a different vacation than they expected. Instead of spending their time on the beach, an examining judge on Wednesday ordered them to spend at least the next four days in Philipsburg police station holding cells.

The judge extended the pair’s pre-trial detention to eight days on Wednesday. They had already spent four days in jail following their arrests on Sunday night on charges of disorderly conduct, destruction of property, and threatening. The woman also faces charges of assaulting a police officer.

The incident started after the man reportedly forced himself into the kitchen of Topper’s Restaurant and Bar, destroying plates and glasses and threatening the workers with a knife. He was said to be heavily intoxicated.

Bystanders captured videos of the arrest on their mobile phones, which circulated widely in the hours after the incident. The videos caused widespread condemnation of the couple’s violent actions.

While the man was visibly resisting arrest and declaring himself to be a “gangster”, his partner was caught on camera assaulting a police officer.

One video showed the officer crumpled over in agony after apparently being hit in the groin. The woman, who was then sitting handcuffed in an unmarked police vehicle at the roadside, hotly denied committing the act. “I didn’t kick him! You see me kick him?” she told the VKS officer.

Suddenly her handcuffed partner opened the police truck’s door and the VKS officer turned away from the woman to help restrain the unruly arrestee.

The half-naked and handcuffed woman then bolted and made it to the other side of the street before falling face-first onto the pavement when another officer tried to grab her. She was then dragged back across the pavement to the police truck.

Attorney-at-law Sjamira Roseburg issued a statement on the couple’s behalf on Thursday night.

“My clients deeply regret their behaviour and would like to use this opportunity to sincerely apologise to the police officers and the public of St. Maarten for their conduct,” said Roseburg. “My clients came to our beautiful island on the occasion of a birthday celebration, where things took a turn for the worse during said celebration.”

Despite this apology, Roseburg said it is “hard to turn a blind eye to the manner in which my clients were handled by the police.” For her, there had been use of excessive force.

According to Roseburg, the woman had not fallen, but had been knocked to the ground by the pursuing police officer.

“This was unnecessary and uncalled for, to say the least,” said Roseburg. “Actions taken by instant reflex or for the sake of retaliation … should not be their go-to. We expect that, in carrying out the duty to serve and protect, composure will be maintained, and that every individual will be treated as a human. In no circumstance should violence ever be countered with violence.”

The officers’ dragging the woman across the ground caused injuries that require medical care, said Roseburg.

Roseburg says the woman – who is also diabetic – has not been given adequate medical care while incarcerated, which had led to one of her injuries’ becoming infected.

“To date, she has not been fully granted the basic and proper medical care she requires, and is entitled to, while being in care of country St. Maarten,” said Roseburg.

Roseburg claims that the Prosecutor’s Office is only trying to “make an example” out of the couple.

“In the past there have been instances where others were sent back to their place of origin for far more serious allegations and crimes while awaiting their court case,” said Roseburg. “This makes me wonder whether my clients would still be incarcerated had the incident not made its rounds on social media. … I believe the pretrial detention is being used to punish them, while this is not the purpose of the pre-trial phase.”

The Prosecutor’s Office said in a press release on Thursday afternoon that any assault on the country’s police officers – whether by tourists or residents – will not be tolerated. The same goes for property damage and disruptive behaviour, it was stated in the release.

“[The Prosecutor’s Office – Ed.] is aware that St. Maarten, as a country that is tourism-dependent, relies on visitors to help its economy. However, this does not mean that breaking the laws by visitors will be overlooked, especially when it comes to any disregard for law enforcement officers executing their duties,” said the Prosecutor’s Office.