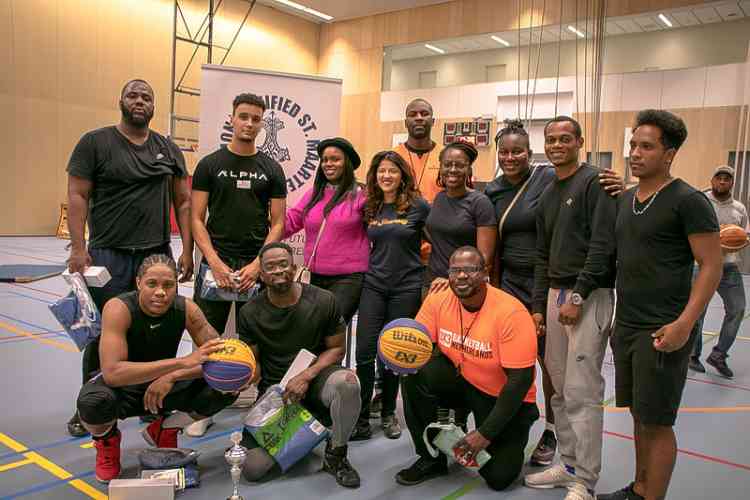 The basketball competition was fierce, as usual. Photo courtesy USC.

THE HAGUE–Students, athletes and young professionals from the Dutch Caribbean took part in the third bi-annual Dutch Caribbean All-Star Athletics Day, hosted by Unified St. Maarten Connection (USC) in The Hague on Saturday.

The Dutch Caribbean All-Star Athletics Day is held every other year. The earlier editions in 2014 and 2016 were also major successes. It is an event where students and young professionals can meet new and familiar faces, or just take a break from the busy school or work life.

The event was held at the recently-built Sport Campus Zuiderpark this year. “It’s always great to see the hard work of our members and volunteers pay off on a day like this. And seeing that happen in this venue was extra special this year,” said USC Chapter Director Christella Garard.

Aside from the many spectators, there were nine basketball teams who contended in a 3-on-3 tournament, while other individuals competed in an obstacle course run and a workout challenge.

The basketball teams – Elite 4, Eurostep Afrovibes, Leftovers, Generals, Pelicans, Rebels, South Central, SXM Ol Skool and United We Ball – were involved in a fierce competition. Ultimately the tournament was won by team South Central, who took the trophy for the second year in a row. In second place was team United We Ball and team Leftovers placed third.

Some athletes competed in an obstacle course run set up by young professional Rainer Ranis using his recently developed smart phone app for teachers, Moving and playing together (“Bewegen en samen spleen”). The athlete with the fastest time on the obstacle course won a cash prize. Cairon Herbert won first place with 18.20 seconds. Allynson Hodge placed second with a total time of 18.53 seconds and Jonathan Philips placed third with a total of 20.12 seconds.

Athletes, volunteers and members of the public took part in several work-out challenges led by personal trainer Shiera Potmis. The first challenge of the day was the push-up challenge, won by Stuart Williams with 109 push-ups in one minute. The plank crawl challenge was won by Duane Meade, who plank crawled the course in just 11.25 seconds. The winner of the wall-sit challenge, Rainer Ranis, won by lasting 1.25 minutes in a wall-sit. The pull-up challenge was won by Jonathan Samuel with 37 pull-ups.

The deejay for the day, DJ Fiber made sure to keep the public entertained during the event with everyone’s favourite Caribbean music.

Morenita Petrona and Xynara Dedier-Baly were on call to provide first-aid and ensure the players’ safety. Thankfully there were no serious injuries.

This sports event would not have been possible without USC’s dedicated members, the many volunteers who helped set up, organise, keep score, serve guests and clean up. A total of 30 volunteers helped at Saturday’s event, including 19 members of USC’s board and committees. USC thanked the sponsors LT FIT FORCE and the Netherlands Basketball Association which also made the event possible and contributed by providing referees, trophies and expertise.

“The event was quite good. It started off a little slowly, but as the day progressed we got more and more people and more hype, and if you weren’t here then you missed out,” said USC’s event coordinator Mayelina Harrigan.

USC is a voluntary organisation with the aim of bringing togetherness and unity among different people with its events, and providing insight through its information publications. More USC events and publications are planned for the remainder of 2018. (Written by Amanye Y., reviewed by Sidoney S. of USC)