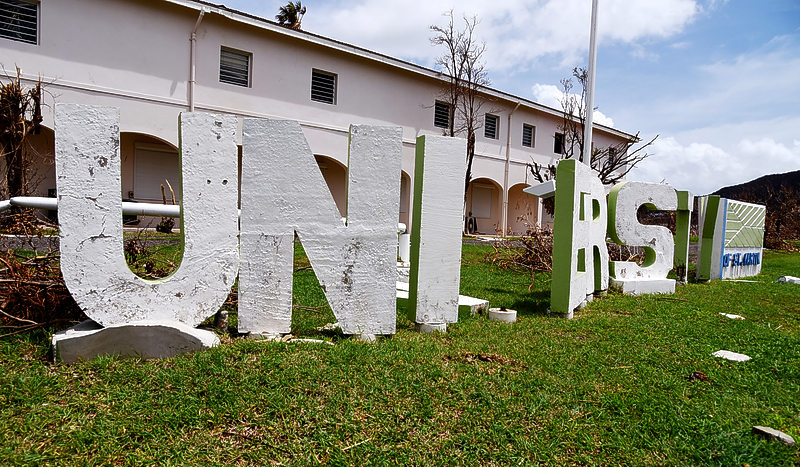 POND ISLAND—The president of the local university cautioned that healing the physical damage of Hurricane Irma’s devastation would be quick, but that cleansing the island’s spirit of invisible wounds would take more effort.

A handful of staff, students and volunteers helped clear the University of St. Martin of Hurricane Irma-related debris on Wednesday morning, a step toward restoring the campus to normalcy. The Category 5 storm only did relatively minor damage to the university when it tore a catastrophic path through the Caribbean one week ago and devastated the island.

The university scheduled a 9 a.m. meeting for Friday to talk with staff and faculty about the aftermath of Irma and its effects on them. USM President Francio Guadeloupe said administrators plan to address the human costs of the hurricane’s damage to its staff, whether they lost property or not.

“Then we’ll know how many people are still on the island, how they are doing emotionally as well as materially and based on that, then we can say, ‘Ok, we can start classes,’ but part of it is also healing,” he said. “People have to give meaning to what took place.”

Guadeloupe was also speaking from personal experience. He lost his home in the storm.

Liberal arts student Robert George was among the volunteers. He said the material repairs to USM might be done within weeks, but he predicted there would be a longer-term impact on faculty and on his peers.

“We’re going to lose even more time, so this semester I honestly think is going to be difficult,” he said, of trying to revive the semester after the lull in cleaning the debris. “If we clean this up as soon as possible, then things can go back to normal, but in terms of the education and everyone else, you have to take into consideration, other people might have lost their homes…so I think it will be a little quieter.”

The island is working toward recovery after the brutal lashing from Hurricane Irma, a record-breaking storm that swept up much of Dutch St. Maarten and French St. Martin. Some businesses have slowly resumed working as GEBE restores power to various districts across St. Maarten.

“I understand the urgency with everyone saying, ‘We’re bouncing back. We have GEBE coming back and water coming back, we just have to move forward.’ I think that is important,” said Guadeloupe, adding, “But I think people have to recognize there is also an emotional dimension and a psychological dimension, and you have to take care of that.”