Home Local News USM to close in November if Government does not increase subsidy to... 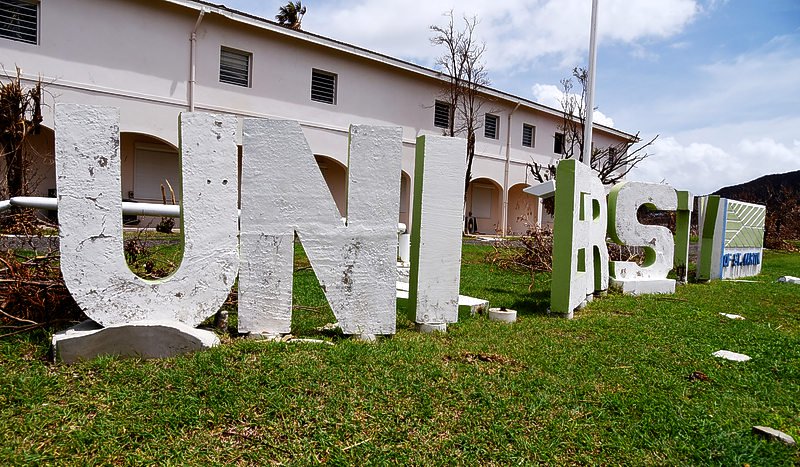 POND ISLAND–University of St. Martin (USM) will be forced to cease operations and close its doors at the end of November if government does not increase the institution’s annual subsidy from NAf. 850,000 to NAf. 3,000,000.

USM sent a letter to this effect to Minister of Education Culture Youth and Sports Silveria Jacobs on Monday.  “It’s a do or die scenario,” USM said in a press statement on Tuesday. “The NAf. 850.000 that the institution currently receives, which boils down to less than one per cent of the country’s annual budget allocated to education, will not suffice given post-Irma conditions.” USM said it depends heavily on tuition from primarily students who either work in the tourist industry and its service-related spinoffs or whose parents do. This is the group, the bulk of the St. Maarteners in fact, who have suffered major losses. Many of their homes were damaged and many are staying with families and friends or accommodating family and friends. And to make matters worse, they have been laid off (or fear that they will have to accept a salary reduction).

“In such a situation they are rightfully asking for relief or a grace period from the USM. The institution would gladly do so, but without a hard guarantee of the Government of an increase in the annual subsidy of NAf. 3 million, the USM cannot do so.”

USM said the subsidy it currently receives is insufficient to keep the doors of the institution open.

“This is not related to Irma per se, as it was actually never enough, even in the days when St Maarten flourished. It is a known fact the Board [of Directors – Ed.] stated that for many years the USM has been struggling financially.

“The Ministry of Education has known for quite some time that a yearly subsidy-increase of NAf. 3 million was needed to keep the institution afloat. The many petitions made to the Government fell on deaf ears, supposedly because the USM was not accredited and did not enjoy international renown,” it was stated in the release.

In 2014, after a reorganisation spearheaded by Board President Valerie Giterson-Pantophlet, a new management team was put in place whose task was to professionalise the institution. The strategy would only work if a silent private-sector donor, who wishes to remain anonymous, agreed to continue supporting USM financially. Without his support, USM would have had to close shop many years ago.

The Board’s investment in a new management team paid off. USM secured several international level 5 accreditations for its Associate Degree programmes in three years, as well as being able to offer North American accredited Bachelor’s and Master’s degrees via the University of the Virgin Islands at USM (UVI@USM) partnership with UVI.

“For the first time after obtaining their Associate’s degree in St Maarten, USM students could study in the Netherlands and the rest of Europe. This was highly appreciated by parents who understood that their children should gain some college and life experience before travelling to a big country,” the release said.

USM also received international recognition due to the publications of its staff in international academic journals and edited volumes. As a result of these and other positive developments, USM said, its student population registered a steady increase.

“St. Maarten’s society’s confidence in the institution rose, leading the Board to take the bold step of announcing the construction of dorms and the overall expansion of the USM. A drive was planned to raise funds for the expansion. Again the silent donor was instrumental.

“He did, however, place a non-negotiable condition for his continued financial support – namely, that the Government of St. Maarten would finally keep its promise. Without the Government owning up to its responsibility to grant the USM its much-needed annual subsidy of NAf. 3 million he would not continue to silently subsidise the university,” it was stated in the release.

USM alluded to statements made by Jacobs at a press conference held at USM on August 23, when she said Government did not have the funds to increase USM’s subsidy and was still working on the Law on Tertiary Education.

“Then came Hurricane Irma and the USM was once again expected to continue surviving without adequate Government funding. It is the straw that has broken the camel’s back. The silent donor will not continue to do what the Government of St. Maarten should have been doing from day one – namely, taking care of improving the educational and social resourcefulness of its population.

“The Board and Management understand the decision, given that our donor and the entire business community too have suffered significant financial losses,” USM President Dr. Francio Guadeloupe said.

“They recognised that the island had arrived at a stage in its development that it needed a university to take care of those who could and did not want to travel abroad to enjoy a tertiary education: Level 5 Associate and eventually Bachelor and Master Degrees.

“Scholarships abroad was one thing, making sure you had a university for those at home that would cater to the tourist industry and the island’s direct needs was another. It was the task of the Government whom the hardworking people of St Maarten had put into office to make sure that those who could go abroad and those who stayed at home enjoyed a sound education,” the release said.

“Education, especially tertiary education that produces a competent and morally grounded citizen, is after all the motor of any development progress. This is known throughout the Caribbean.”

USM said it has produced a number of notable persons in St. Maarten without proper Government funding.

“If Education matters, if tradition matters, if national pride matters, if the legacy of the late Dr. Claude Wathey and the late Commissioner Edgar Lynch who also supported the USM matters, then one can expect the Government to do the right thing. They will fully support the USM with the increase in subsidy, which is supporting the people and the children of those persons who built and will rebuild St. Maarten.”

USM said closing would have adverse effects on its staff and student population.

“It is now in the hands of Government, as it always should have been, whether they will do their duty and take care of the educational needs of St. Maarteners. The USM awaits the reply of Government, as should every concerned St Maartener who believes that this island should have its own university,” the release said.