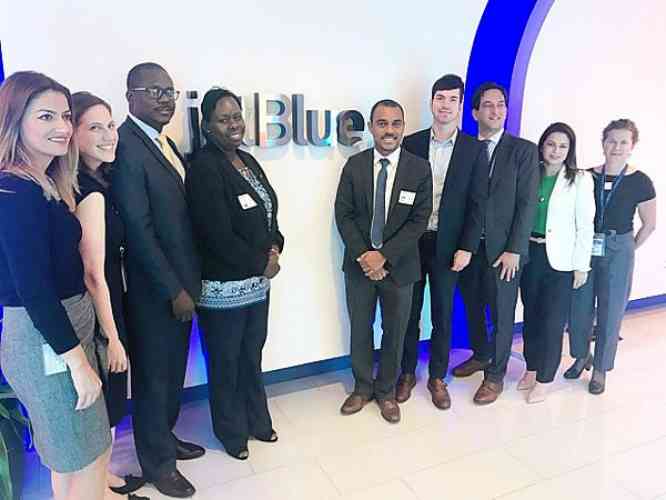 PHILIPSBURG–United St. Maarten Party (USP) was very proud to learn that the efforts of former Minister of Tourism, Economic Affairs, Transportation and Telecommunication (TEATT) Mellissa Arrindell-Doncher has paid off in the first-ever weekday service to the island from Fort Lauderdale recently announced by JetBlue.

This service is expected to drastically improve the airlift and pricing of flights to and from the South Florida area, St. Maarten’s most popular connecting area to the United States (US).

“USP as a party has always taken its work with the TEATT Ministry very seriously, and we know that every day fruits of our labour help the people of St. Maarten. It is what we as a party have always been committed to,” stated USP leader MP Frans Richardson. “Today we have just one example.”

Soon after being appointed TEATT Minister by the USP, Doncher and MP Rolando Brison, who was Director of Tourism at the time, set out to identify the key route development goals for the Ministry.

“Fort Lauderdale was seen as a huge priority for many reasons: It is the fastest growing US international airport for several consecutive years, it would create a new alternative to the increasingly saturated Miami route, and would create competition on that route to reduce prices for travellers,” explained Brison.

“Being that airlines typically plan schedules nine to 16 months in advance, it takes a long time before route development negotiations pan out into actual flights. In this case, we are happy to see that our efforts that started over a year ago have resulted in such an important route opening for St. Maarten.”

In June 2017 the Minister had received JetBlue’s commitment to launch the service. Even after Hurricane Irma, in November 2017, the Minister and her team had met with JetBlue once again. The airline, voted the best airline in North American by TripAdvisor for 2017, at the time commended the hard work the TEATT Ministry was doing to help in the island’s recovery and not only committed to being among the first airlines to relaunch flights to St. Maarten but stayed committed to the Fort Lauderdale route.

Fort Lauderdale represents about 15 per cent of JetBlue’s capacity; it is the largest airline at that airport. The airline recently said that even though competition may be rising, JetBlue sees South Florida as a “large underserved market” with more expansion capabilities. JetBlue plans to continue to “grow thoughtfully” in the market, the airline said.

JetBlue also plans to roll out its Mint service (similar to first class) at Fort Lauderdale later this year. In other markets, the introduction of Mint service has led to improved profitability. Mint service was also discussed with the minister in New York.

The minister was joined in New York by members of her cabinet, St. Maarten Tourist Bureau head Rolando Brison and St. Maarten’s marketing firm for the US, MMGY Global/Spring O’Brien, whose representatives attended the meeting to familiarise themselves with the initiatives/wishes of St. Maarten and JetBlue.

USP fully expects that other route development efforts will pan out soon, such as the other Fort Lauderdale route negotiated with Southwest, as well as first time routes including S7 Airlines’ Moscow-SXM route and TUI’s Belgium-SXM route, among many others.