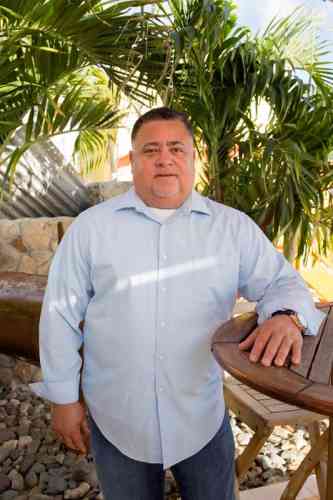 PHILIPSBURG–Member of Parliament (MP) Frans Richardson will have to sit the next eight days behind bars as a suspect in the Emerald investigation. The Judge of Instruction ruled on Friday that Richardson’s and Windward Roads director J.H.B.’s arrests are legitimate.

Richardson’s arrest on Wednesday is the result of the Emerald case, an investigation into fraud and corruption at Port St. Maarten. Richardson is suspected of accepting bribes and tax fraud.

J.H.B. was also arrested on the same day as a suspect in an investigation into the bribery of civil servants, politicians and people working in the construction sector.
A small group of supporters and family members gathered outside the Philipsburg Courthouse on Friday. Richardson and J.H.B. were escorted by members of the National Detective Agency in the afternoon and Richardson was joined by his lawyer in a closed-door hearing.

The United St. Maarten Party (US Party) board planned to have a press conference on Friday afternoon, but cancelled it at the last minute. The Prosecutor said in a statement issued to the media on Wednesday that Richardson is also suspected of participating in a criminal organisation aimed at recruiting votes. This investigation is being conducted by the National Detective Agency of St. Maarten (Landsrecherche Sint Maarten) under the direction of the Prosecutor’s Office.

J.H.B. was arrested in connection with the “Larimar” case, an investigation into the bribery of civil servants, (political) authorities and persons in the construction sector, among other things. Previous actions, including a search at Windward Roads on January 24, led to this arrest.

The Prosecutor’s Office of St. Maarten will be extra-alert for signs of buying and selling votes during the period up to the election. Persons who have information about this are asked to contact the National Detective Agency, anonymously if necessary, via the telephone number: +1-721-522-5810.