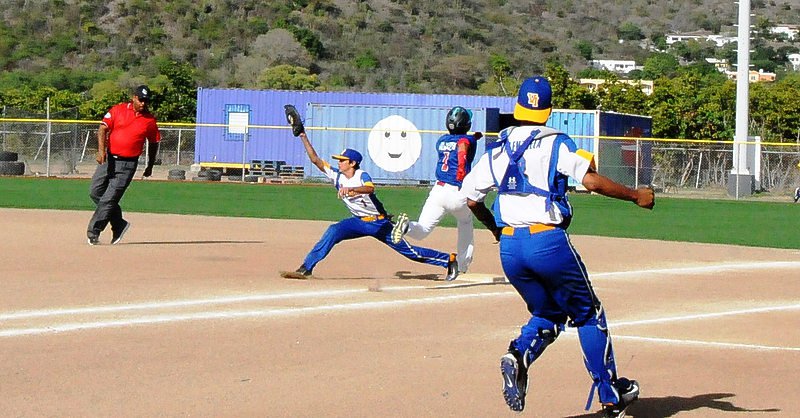 It was the seventh inning of the first 17th Annual Latin American and Caribbean Junior Division Championships semi-final. His U.S. Virgin islands team was up against Puerto Rico. Illidge was a pinch hitter. It was his first at bat of the game.
Puerto Rico had advanced to the semi-final winning all their games in Pool A, going 4-0. Virgin Islands was the number two team out of the smaller pool B. They had gone 2-1.
Puerto Rico led 2-0 at the Little League Ballpark on Pond Island Friday. There were two outs. The winner of the game would advance to the Final and get to play at 3:00pm Saturday. The loser would play at 10:00am for third place.
Illidge dug his cleats into the dirt. The umpire signalled play ball. The pitcher wound up and Illidge clocked one. The center fielder went back. There was not enough room. The ball cleared the fence by inches. The crowd went wild.
Illidge trotted around the bases as his teammates clambered out of the dugout to meet him at home plate.
The celebration was short lived. The next batter bounced the ball back to the pitcher for the final out.
Puerto Rico will play in the final against Panama at 3:00pm. USVI face Venezuela at 12:00am.
Nine teams entered the tournament that began last Saturday. Also going to the semi-finals from pool A were Venezuela at 3-1 and from Pool B the group winner Panama at 3-0. Panama would go on to edge Venezuela 5-4 in the late game Friday evening.