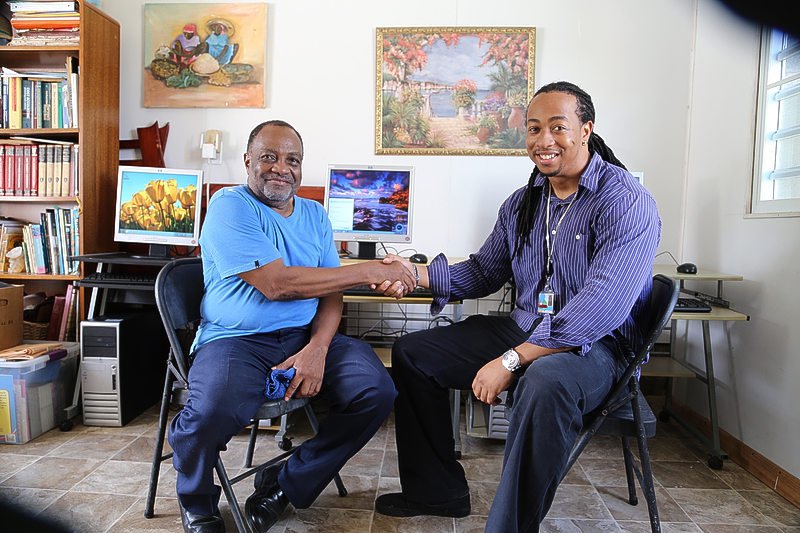 PHILIPSBURG–The children under the care of the New Start Foundation foster home now have access to three computers and a new printer to do their homework for the new school term thanks to a donation from United Telecommunications Services (UTS).

New Start said teens staying at the home were looking at the “bleak prospect” of not handing in their homework on time if they could not get use of the only laptop available at the home. “Their spirits were lifted Tuesday, when UTS Information Technology (IT) specialist Ceslon Lake, came calling to install three PC systems that the older children in the foster home can work with,” New Start said in a press release.

“It was just a case of asking our COO [Chief Operations Officer – Ed.], Mr. Leo Juan Pedro and the IT department to look around at our surplus stock to put together some PC systems for this very worthy cause,” Carty said. “UTS is very happy to help and to contribute to a successful back to school opening for the children of this Foundation where they can be provided with the tools they need for the new school term,” he added.

Benjamin accepted the computers, with monitor, keyboard and mouse. He said they will be put to good use along with the new printer which will be delivered soon.

“We did not expect homework to start coming from the first day of the school term and one of our children who had signed up for a computer programme at school needs one at home to practice on, so I would say receiving these computers from UTS this week is most timely, and for the children, a real life-saver,” Benjamin noted.