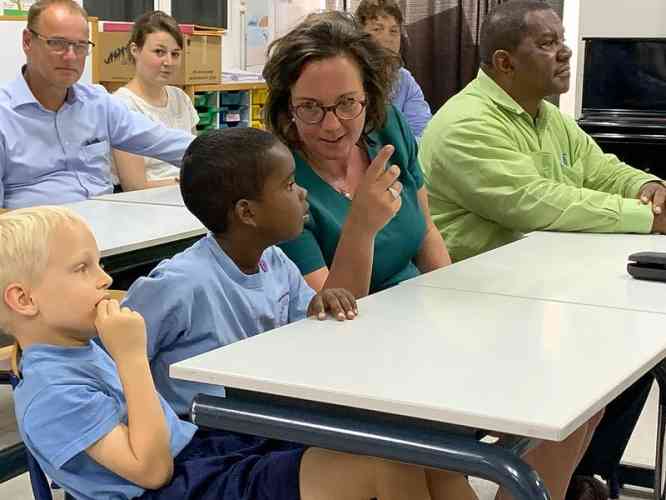 THE HAGUE–Dutch State Secretary of Social Affairs and Labour Tamara van Ark says establishing the benchmark for the social minimum for Bonaire, St. Eustatius and Saba is a next step to make the life of people on the islands better.

“The benchmark for the social minimum gives a direction to our input to fight poverty and to come to meaningful interventions. At the same time, there is still a lot of work to be done,” stated Van Ark in a letter she sent to the Second Chamber of the Dutch Parliament on Friday regarding her visit to St. Eustatius and Saba June 25-28.

Focal points of that visit were the benchmark social minimum, combating poverty, childcare, and work permits.

In St. Eustatius, on June 27, Van Ark and State Secretary of Home Affairs and Kingdom Relations Raymond Knops took part in a meeting with the Government Commissioner of St. Eustatius and representatives of the Bonaire and Saba Executive Councils.

“I am looking back at constructive talks about the benchmark social minimum and the steps that still have to be taken to reduce the cost of living and to improve the income position of the islands’ residents. I am happy that the island governments have responded positively to the elected approach and the steps that have already been taken,” Van Ark stated.

The island governments expressed a number of concerns during the meeting in St. Eustatius. Besides the high cost of living, the islands brought up the issues of connectivity, cost-covering within the utility companies in relation to the scale of the islands, social participation, and attention for the working poor and elderly.

According to her, a structural improvement of the situation of the people in the Caribbean Netherlands requires a joint effort of the Dutch government and the public entities. She said it was agreed during the meeting to keep an open dialogue on the issues of concern.

Van Ark said achieving good-quality, safe and accessible childcare and after-school care is an important step in improving the life conditions of the people on the islands. The Dutch government and the public entities are investing jointly in improving childcare and after-school care in the BES(t)4Kids programme. The Dutch government will be making some 10 million euros available for this per January 2020.

Van Ark was very positive about her visit. “I look back at a good visit to Saba and St. Eustatius. I am happy that together with the State Secretary of Home Affairs and Kingdom Relations, I was able to secure agreements with the public entities about ways to improve the situation of residents in the Caribbean Netherlands.”