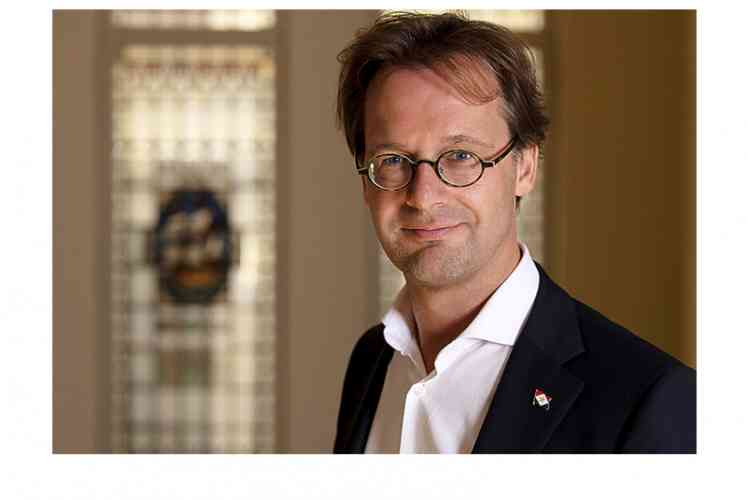 Member of the Second Chamber Ronald van Raak of the SP wearing a pin with the Saba flag on Tuesday.

THE HAGUE–Member of the Second Chamber of the Dutch Parliament Ronald van Raak of the Socialist Party (SP) wore a pin with Saba’s flag during Budget Day in The Hague on Tuesday.

Van Raak’s main reason for wearing the pin was to seek attention for the need to establish a social minimum in Bonaire, St. Eustatius and Saba, but also because Saba deserves a compliment and should be rewarded for its solid (financial) management.

“I chose the Saba flag because this island shows that good cooperation can lead to good results. In my opinion, Saba can perform more tasks itself, because the politicians on this island can often do things better than all those ministries in The Hague,” Van Raak said.

According to the Member of Parliament (MP), the transferring of tasks to Saba should also include means for poverty alleviation. “Saba should also get more funds to combat poverty, because the local politicians are more knowledgeable about what the people need,” he said.

This is not the first time that Van Raak is seeking attention for the transfer of tasks to Saba. He has already pointed this out during several meetings in the Second Chamber. During last week’s debate Van Raak repeatedly urged State Secretary of Social Affairs and Labour Tamara van Ark and State Secretary of Home Affairs and Kingdom Relations Raymond Knops to establish a social minimum for the Caribbean Netherlands, which serves as a tool to combat poverty.

The Public Entity Saba has asked the Dutch government to transfer more tasks and responsibilities to the island. In a recent letter to state secretaries Van Ark and Knops regarding the social minimum benchmark study, Saba’s Executive Council once more pointed out this wish.

“The public entity has shown positive developments in the last years. There is a stable government, the finances are in order, which is confirmed by the accountants and the Committee for Financial Supervision CFT, and yearly improvements are made in the government organisation. We consider it an opportune moment to give content to a different division of tasks: more tasks and responsibilities to Saba,” it was stated in the letter.