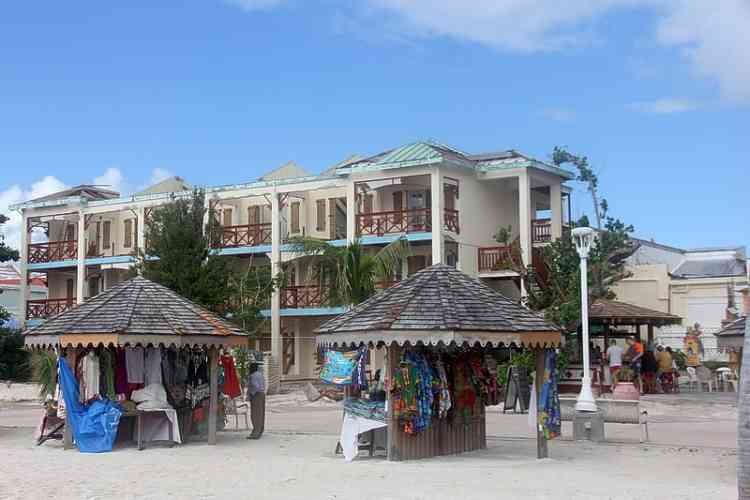 PHILIPSBURG–Pasanggrahan Royal Guesthouse management has won the Court’s favour in summary proceedings in which it called for the removal of six marketplace-vendor booths from the beach in front of the boutique hotel on Boardwalk Boulevard. On Friday the Judge ordered the removal of the contested wooden booths and the restoration of the beach to its previous condition by June 6 at the latest.

Country St. Maarten was forbidden to initiate any construction activities on the beach, including but not limited to the construction of additional vending kiosks. In case of non-compliance, Government will have to pay a daily fine of US $5,000, to a maximum of $500,000.

The Ministry of Tourism, Economic Affairs, Transportation and Telecommunication (TEATT) announced December 19, 2017, on the Government Information Page that “due to the destruction caused by Hurricane Irma and to facilitate the beautification project for Philipsburg” three locations on Great Bay beach were designated as marketplaces for a period of six months, “to be re-evaluated after that period.”

However, many market vendors have returned to their previous location behind the Courthouse in the meantime.
On behalf of Pasanggrahan’s Managing Director Tini Tinitali and Office Manager C.P.A. Philis, attorney-at-law Peter Bruns of Bermon Law Office had called on the Court to order the removal of the six market stalls in front of the boutique hotel. Pasanggrahan claimed the market stalls, which were erected December 5 and 7, 2017, block the hotel guests’ view and cause noise disturbance, “which detracts from the quiet beach near the boutique hotel,” stated Bruns.

The hotel was severely damaged by Irma. The main building and one of the two guestroom buildings were destroyed, but the hotel, restaurant and beach bar are open. Therefore, the hotel is suffering damage due to the presence of the market stalls and vendors, the lawyer claimed. Repairs to the damaged buildings are set to start this month and will take approximately four to five months.

The Court did not find it proven that the hotel had actually suffered damage due to the six booths in front of its property. However, this will change once the historic hotel has been fully restored and guests will be confronted with a marketplace blocking the view of the beach and Great Bay, the Judge said.

According to the 1994 Beach Policy, “no physical and mental barriers” are allowed that prevent “wide” access. “Construction works on the beach are annoying and disfiguring the surroundings,” it is stated in the Policy, which says it is undesirable that there are “businesses” on the beach.

Therefore, the Court arrived at the conclusion that the construction of the six booths in front of the hotel constitutes a violation of Government’s own Beach Policy. The Judge also said Government had failed to consult with the hotel and had violated the principles of good governance.

Government’s lawyer Attorney Richard Gibson Jr. had said the damaged stalls had been removed from their previous location as a precautionary measure. To beautify and enhance Great Bay for visiting cruise-ship passengers, it was decided to relocate some of the best booths to three different locations for a period of six months. After that the booths are to be replaced in the heart of Philipsburg.