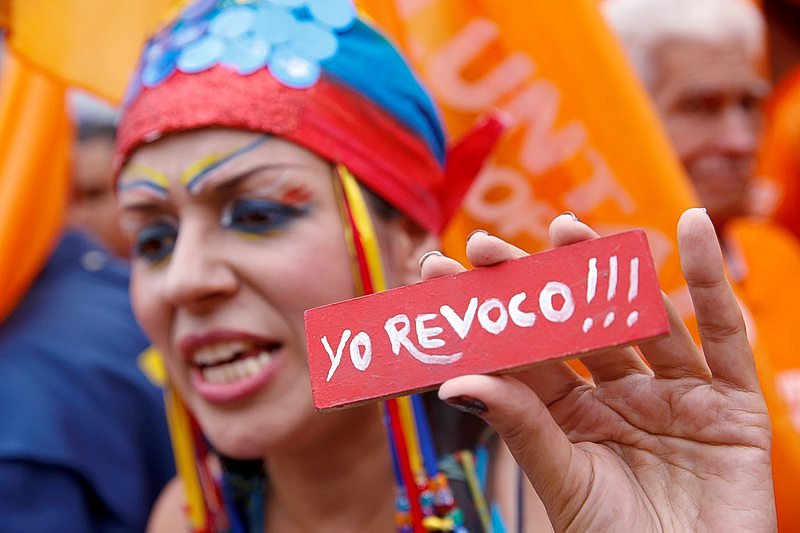 The Democratic Unity coalition has ramped up its push to oust Maduro amid a worsening economic crisis, but says the government-leaning electoral body is intentionally delaying the verification of signatures in favour of the referendum.
Waving flags and blowing whistles, hundreds marched in the capital of Caracas as well as the provinces – where food scarcity and power cuts are worse – but authorities blocked them from reaching election board offices. Protesters and National Guards squared off on a Caracas highway, where demonstrators chanted “freedom” and waved copies of the constitution. Some covered their faces and tossed stones.
“They don’t let us march. They don’t let us eat. They don’t let us live peacefully. What else can we do? We have to fight however we can against this tyranny,” said Juan, declining to give his surname as he donned a bandana.
At one point, an officer appeared to squirt pepper spray on two-time presidential candidate Henrique Capriles, a video showed. Capriles later tweeted he was fine.
A new election would be held if the opposition succeeds this year in recalling Maduro, whose term ends in 2019. But if a successful recall referendum is held in 2017, the presidency would fall to the vice president, a post currently held by Socialist Party loyalist Aristobulo Isturiz.
The opposition says Maduro, elected in 2013, is pushing the OPEC country towards economic catastrophe. One recent poll showed almost 70 percent of Venezuelans want Maduro, 53, gone this year.
“We have to suffer a queue of nine to 10 hours for corn flour, we walk from pharmacy to pharmacy looking for medicine,” said Irma Rojas, who was protesting in northwestern Falcon state. “For that and so much more, we want this man out.”
In the western opposition hotbed of Tachira, protesters brandished signs reading “we don’t want to do die of hunger” while some masked youths blocked streets with trash and prepared Molotov cocktails.
The Socialist Party blasts protesters as dangerous coup-plotters and held a separate march on Wednesday. Officials have said a referendum is unlikely this year and have cast doubt over the legitimacy of the signatures.
The opposition submitted roughly 1.85 million signatures on May 2. If they are validated, the opposition must then request another petition drive and gather around 4 million signatures to finally trigger a referendum.