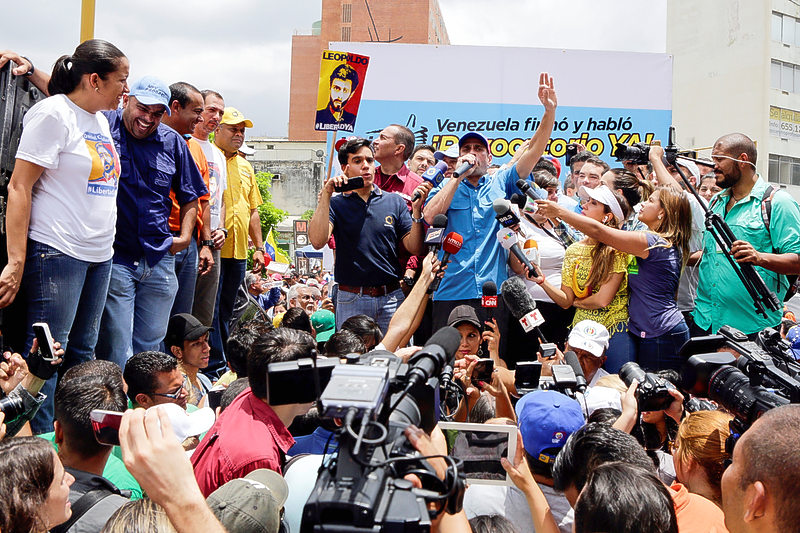 CARACAS–Venezuela’s opposition on Saturday slammed a state of emergency decreed by President Nicolas Maduro and vowed to press home efforts to remove the leftist leader this year amid a grim economic crisis.
Maduro on Friday night declared a 60-day state of emergency due to what he called plots from Venezuela and the United States to subvert him. He did not provide specifics. The measure shows Maduro is panicking as a push for a recall referendum against him gains traction with tired, frustrated Venezuelans, opposition leaders said during a protest in Caracas.
“We’re talking about a desperate president who is putting himself on the margin of legality and constitutionality,” said Democratic Unity coalition leader Jesus Torrealba, adding Maduro was losing support within his own bloc.
“If this state of emergency is issued without consulting the National Assembly, we would technically be talking about a self-coup,” he told hundreds of supporters who waved Venezuelan flags and chanted “he’s going to fall.”
The opposition won control of the National Assembly in a December election, propelled by voter anger over product shortages, raging inflation that has annihilated salaries, and rampant violent crime, but the legislature has been routinely undercut by the Supreme Court. Protests are on the rise and a key poll shows nearly 70 percent of Venezuelans now say Maduro must go this year.
Maduro has vowed to see his term through, however, blasting opposition politicians as coup-mongering elitists seeking to emulate the impeachment of fellow leftist Dilma Rousseff in Brazil. Saying trouble-makers were fomenting violence to justify a foreign invasion, Maduro on Saturday ordered military exercises for next weekend.
“We’re going to tell imperialism and the international right that the people are present, with their farm instruments in one hand and a gun in the other… to defend this sacred land,” he boomed at a rally. He added the government would take over idled factories, without providing details.
Critics of Maduro, a former union leader and bus driver, say he should instead focus on people’s urgent needs. “There will be a social explosion if Maduro doesn’t let the recall referendum happen,” said protester Marisol Dos Santos, 34, an office worker at a supermarket where she says some 800 people queue up daily.