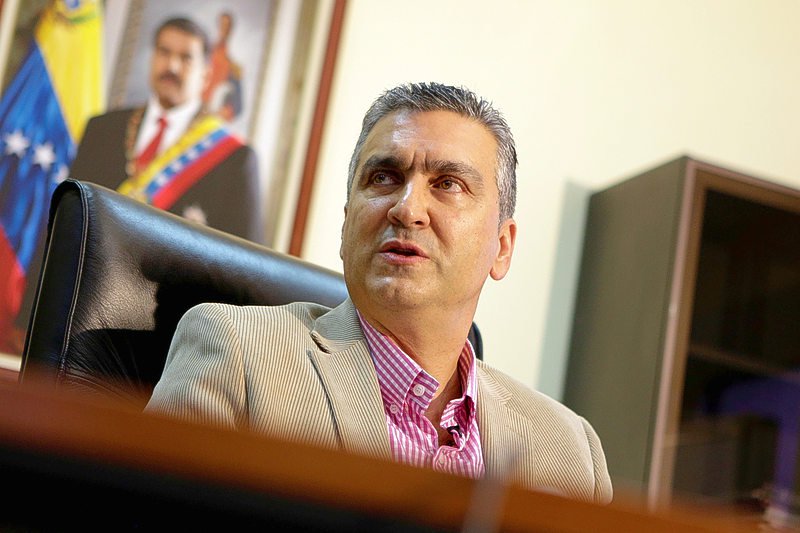 CARACAS–Venezuela has reached a deal with its main financier China to improve the conditions of an oil-for-loans deal, giving the OPEC member’s crisis-hit economy “oxygen” ahead of heavy debt payments, its top economic official said on Monday.

Venezuelan Economy Vice-President Miguel Perez told Reuters that all conditions, including loan time frames, investment amounts and non-financial aspects, had been improved. China has lent some $50 billion to Venezuela in that arrangement over the last decade, and markets are watching to see if Beijing will help President Nicolas Maduro’s socialist government as it struggles with recession, shortages and reduced oil revenue.
“Today we can say that we’ve agreed to new commercial conditions that are adapted to the country’s reality,” Perez said in an interview in his office at the Industry Ministry, which he also heads. He declined to elaborate.
Better terms with China would be hugely useful for Venezuela, given that low oil prices means the South American country would be required to send more barrels to meet its obligations. Oil is trading at nearly $50, about half the levels in mid-2014, although prices have risen almost 80 percent this year.
“This will give the country important oxygen to go forward,” added Perez, a former industry association leader who became economy czar in February, replacing a hard-line socialist who lasted only a month.
Beijing officials could not immediately be reached for comment. When asked earlier on Monday about possible aid to Caracas, a spokesman for China’s Foreign Ministry said Venezuela’s economic crisis was a domestic matter.
Perez said the improved China deal, as well as a steep cut to imports and a new, weaker foreign exchange rate, would help Venezuela crawl out of a “very complicated” semester. The economy is likely to remain in recession until the end of 2017, he added.
Venezuela’s struggling state-led economic model and the fall in oil prices have triggered severe shortages of food and medicine, triple-digit annual inflation, and a slowdown in local business activity. Maduro blames an “economic war” launched by right-wing businessmen and opposition politicians seeking to sabotage him.
The dire economic situation has led to market speculation that Venezuela, with the world’s biggest oil reserves, or its state oil company PDVSA could default. Perez reiterated that all debt commitments would be honored and that any refinancing of PDVSA debt would be good for bondholders.
The company’s president has said PDVSA, which must pay around $4 billion this year to service debt, was in talks with international banks over refinancing debt. Perez said Venezuela could offer assets to guarantee bonds issued under a potential refinancing.
Prioritizing its debt payments, Venezuela has slashed shipments in the last two years, with 2016 imports set to fall to $16 billion, the official said.  That compares with $28 billion in the first three quarters of 2015, according to official data. Some 75 percent of 2016 imports will be financed at the most favorable exchange rate, currently at 10 bolivars to the dollar, Perez added.
Venezuela has two official exchange rates, with the bolivar having weakened past 400 per dollar on the new second system. “We’re searching for exchange rate equilibrium,” Perez said of that system known as DICOM. The greenback is worth nearly 1,100 bolivars on the black market.
Some $4 billion to $5 billion in mining investment is expected from companies by year-end, Perez added, a slower time frame than forecast early this year. Venezuela has already secured a roughly $400 million loan from the Inter-American Development Bank, he said. “There is nothing we’re not exploring,” Perez said.
Venezuela is not considering refinancing its sovereign bonds, though it is not closed to the possibility, he added.
Perez is seen as more inclined towards reform than other factions of the ruling Socialist Party. But many economists express doubt he could turn around Venezuela given the severity of its crisis. Inflation hit 180.9 percent and the economy contracted 5.7 percent last year, according to central bank figures, and unofficial estimates for this year paint an even gloomier picture.
The opposition is working towards a recall referendum against Maduro, whom they say is pushing Venezuela towards a humanitarian disaster.