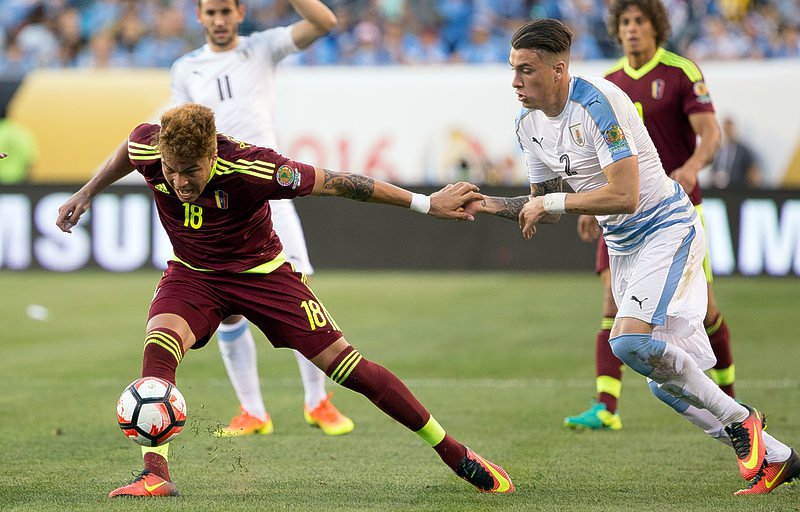 Mexico midfielder Jesus Duenas (20) steals the ball away from Jamaica midfielder JeVaughn Watson (15) during the first half in the group play stage of the 2016 Copa America Centenario at Rose Bowl Stadium in California. Mexico won 2-0. Gary A. Vasquez-USA TODAY Sports. 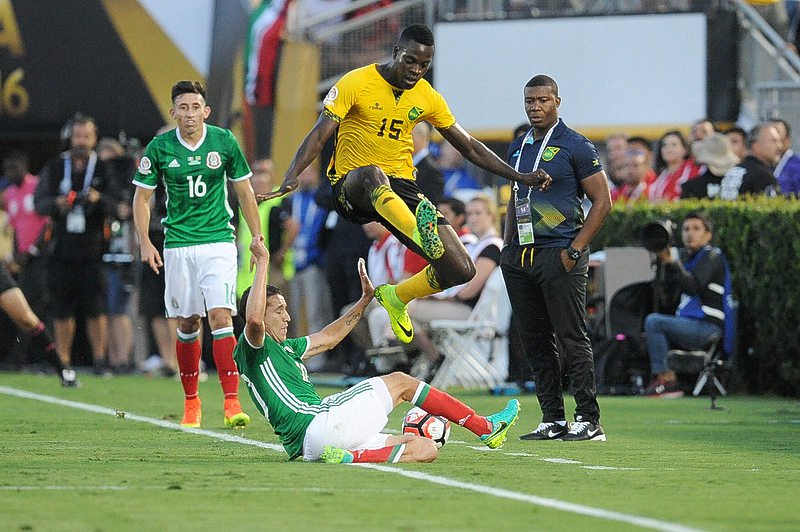 PHILADELPHIA– A goal by Salomon Rondon gave Venezuela an upset 1-0 win over Uruguay in Philadelphia on Thursday that put them on the verge of the Copa America Centenario quarter-finals with the record 15-times champions facing elimination.

When midfielder Alejandro Guerra lobbed Fernando Muslera from more than 30 metres, the Uruguay goalkeeper chased back but only managed to tip the ball onto the bar and striker Rondon raced in to tap it into the net in the 36th minute.

Venezuela, who beat Jamaica 1-0 in their opening Group C match, have six points, three more than Mexico, who beat Uruguay 3-1 on Sunday and were playing the Jamaicans later on Thursday in Pasadena.

For Venezuela, looking for their maiden title, it was a first win in nine Copa America meetings with Uruguay while Rondon became the first “Vinotinto” (red wine) player to score at three tournaments.

The Venezuelans overcame an early hiccup when right back Roberto Rosales was injured after seven minutes and had to be replaced by Alexander Gonzalez.

Uruguay, still without the injured Luis Suarez, made four changes from the team beaten by Mexico and had marginally the better of the opening half hour with midfielder Gaston Ramirez hitting the post.

But Rondon’s goal turned the tide and Muslera had to save sharply from Guerra in the 43rd minute.

The Uruguayans, who won their 15th title in Argentina in 2011, pushed Venezuela back in the second half but lacked finishing and Muslera again prevented them going further behind with a fine save from Adalberto Penaranda in the 68th.

Edinson Cavani came close to equalising in the dying minutes but was wide with one chance and had another saved by Dani Hernandez.

Venezuela, no longer the whipping boys of South American football, first reached the quarter-finals when they hosted the tournament in 2007 and got their best result four years later when they reached the last four.