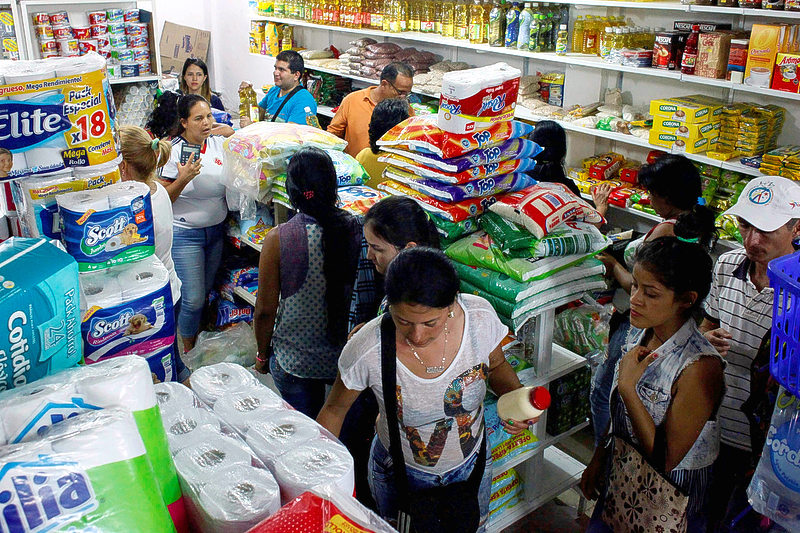 SAN ANTONIO, Venezuela–Thousands of Venezuelans streamed into neighbouring Colombia on Sunday to take advantage of a temporary opening of the border to buy food and medicine unavailable at home in their country’s collapsing economy.

Socialist President Nicolas Maduro shut the border last year in an effort to crack down on smuggling of subsidized products. Venezuela’s product shortages have since worsened, creating further incentives to buy goods in Colombia and bring them back.
A plunge in global oil prices have left the OPEC nation’s government unable to maintain lavish subsidies created during the rule of late President Hugo Chavez, while currency controls have left businesses struggling to obtain raw materials and machine parts.
Venezuelans routinely spend hours in lines at home seeking items ranging from corn flour to cancer medication to auto parts. Shoppers complain of violence in lines, and looting is on the rise.
Bus terminals were packed and hotels filled to capacity in the border town of San Antonio, with many traveling hundreds of miles to shop. “We got here at 2:00 a.m. and slept here in the street. I came to buy medicine because I can’t find any in my country,” said Erna Millan, 59, who drove 12 hours with two friends with the equivalent of about $30 in cash to buy medicine.
“I also came to buy a Cesarean section kit for my daughter, who is about to give birth,” she said.
Crowds of people flooded the bridge that links San Antonio to the Colombian city of Cucuta to cross the border on foot, at times singing the national anthem or chanting “This government is going to fall!”
The governor of Venezuela’s state of Tachira opened the border last Sunday, attracting some 35,000 people, and this weekend allowed crossings both Saturday and Sunday. Colombia’s government said 44,000 people crossed on Saturday to buy food, medicine and cleaning products and said it expected that number to almost double on Sunday.
“I’ve come to buy what I can’t find in the country – rice, beans, lentils, sugar, toilet paper,” said Elizabeth Perez, 47, a public employee. “I came a few days ago with a group of people so I could cross into Colombia today. We’re only eating once a day.”
Maduro says socialist policies helped reduce poverty in Venezuela during Chavez’s 14-year rule and insists his government is now the victim of an “economic war” led by political adversaries with the help of the United States.
Venezuelan officials acknowledge some difficulties, but accuse media of exaggerating problems to destabilize the government.