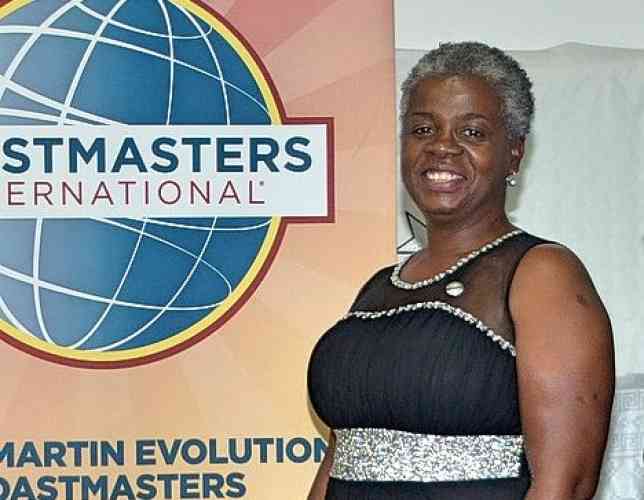 According to the Club’s release, Brooks joined St. Martin Evolution Toastmasters Club in 2011. She became President of that club in 2013, Secretary in 2014, and Vice-President of Education in 2015, a position she still holds now since 2017.
She is a chartered member and mentor for the Cupecoy Sunset Toastmasters Club and has been mentoring many Toastmaster Members. She served on the district level as Area Director for Area 29 in 2016 and was the liaison between the three clubs within her division and the District.
During the French-side Territorial Council Election in 2017 she organised one of the campaign’s main events: “Get to Know Your Candidate” at the Chamber of Commerce in Concordia.
Toastmaster Vernicia’s passion for the opportunities offered by Toastmaster and its development programme, which is self-paced, has resulted in a loyal and dedicated advocate for Toastmaster programmes. Her favourite quote is by Napoleon Hill: “If you cannot do great things, do small things in a great way.”
St. Martin Evolution Toastmasters Club also recognised Kathia Magdeleine from St. Maarten Achievers Toastmasters Club and Elroy Hughes from Philipsburg Toastmasters Club as DTMs.
The Distinguished Toastmaster award represents the highest of educational achievements in Toastmasters. This year three new DTMs joined the ranks of locally known Toastmaster personalities such as Rolando Tobias, Valerie Brazier, Amanda Vital-Bedminister and Priscilla Bell.
Commitment, consistency, being humble, achievements, accomplishments, pride, service and mentorship were the key Toastmasters qualities brought forward from those three new DTMs that evening.
As it was an event of recognition organised by the French-side Toastmasters Evolution Club, some of the French-side associations and service clubs were also present. St. Martin Santé, the Red Cross, Lions Club Oualichi, Rotary Nord and Secours Catholique all received tokens of appreciation for the work done since September 6, 2017. Le Trophée Guadeloupéen, Grape Wine, Exquisite Designs & Decorations, Casa Pepone, Femmaissance and Alouska Lake were the sponsors of the evening.