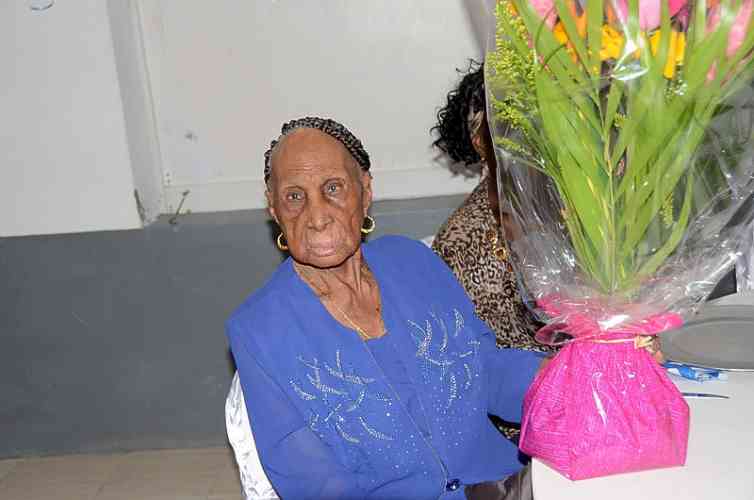 While he wished her an enjoyable day with family, on a personal note he said her birthday comes with regrets, because her house is still unrepaired since the hurricanes of 2017.

“It’s always been a privilege in the district to celebrate many of her birthdays,” he said. “Unfortunately, commitments have not been kept because of circumstances beyond my control. As a district and association, we did our best, because honouring your seniors, your centenarians, is what you do. They are the pride of the country.

“Jointly the district and the Collectivité agreed to do what was necessary, on a promissory note. We had private companies that offered to put on a roof for free. We [association – Ed.] have receipts from what we paid to engineers, architects, to rebuild what was an old house. Unfortunately, we did not get the cooperation from the Collectivité and today nothing has been done to the house except some cleaning. But we are still looking into what can be done.

“I can’t speak from the district standpoint, but only from the associations. We did the best we could. Veronique talks about wanting to go back to her house all the time. She is still staying with family members and is well taken care of. I sincerely hope something can be done before anything happens to her.”

Veronique Javois was born in St. Martin on May 18, 1918, spending most of her life at the house on Rue de Hollande where her main occupation was as a baker. She used a wood oven that was built by her late husband Paul Javois and baked bread for the residents of St. James and Marigot. She started baking bread when she got married at 21 in 1939.

“People would line up to buy her bread before they went to work, and when she got too old to bake, she started selling bread for another company,” Députée Claire Guion-Firmin said of her aunt last year. “She was always in the bread business. Because she had no children of her own, she was everyone’s mother, and anyone who came around, she gave them food and was always welcoming.”