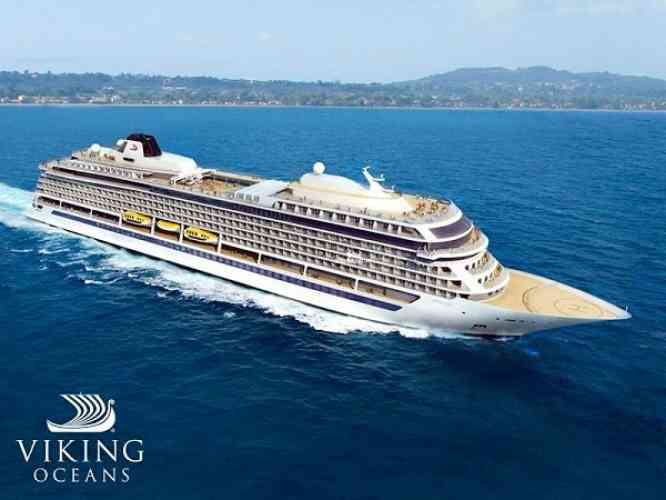 PORT ST. MAARTEN – Viking Ocean Cruises cruise ship Viking Sky will be making its inaugural port call on Monday, March 5. This will be the first inaugural call of a cruise vessel for the port since the passing of Irma in September 2017.

Viking Ocean Cruises was also the first cruise line to start commercial cruise ship visits to the destination post-Irma on December 4th with the Viking Sea. Port St. Maarten Management looks forward to welcoming the Viking Sky on Monday.
“The first inaugural call of a vessel from a cruise line post-Irma is testament to our destinations return to the cruise tourism market. Let us continue to welcome our guests with a smile and be courteous as we build back better our cruise product and destination,” Port St. Maarten Management said over the weekend.
The Viking Sky took its maiden voyage in February 2017 and has a length of 748 feet and a beam of 94.5 feet, gross tonnage of 47,800; and carries 930 guests. Viking cruise passengers are 55 and older and are mostly from North America and the United Kingdom.
Viking Cruises, is considered the leader in river and small ship ocean cruising, offers destination-focused itineraries designed for experienced travelers who have an interest in geography, culture and history.
In its first year of operation, Viking Ocean Cruises was rated the #1 ocean cruise line in Travel + Leisure’s 2016 “World’s Best” Awards, which came on the heels of being rated the highest of all cruise lines in the 2015 “World’s Best” Awards.
Viking currently operates a fleet of 61 vessels, offering scenic cruising along the rivers and oceans of the Americas, Europe, Russia, Egypt, China, and Southeast Asia. By 2019 the company will operate six 930-passenger ocean cruise ships and will sail itineraries in Scandinavia and the Baltic, the Western and Eastern Mediterranean, Asia, Australia, North America and the Caribbean.
Viking was founded in 1997 with the purchase of four ships in Russia. In 2000, the company purchased Europe’s KD River Cruises in order to grow its fleet, to leverage 40 years of river cruising experience and to acquire rights to prime docking locations in key European cities.

The company expanded into the American market in 2000, establishing US headquarters in Los Angeles, California. Through rapid expansion, the company has grown to be The World’s Leading River Cruise Line, with double-digit growth in recent years. And with the launch of its ocean fleet in 2015, the company has also become the leader in small ship ocean cruising.

In 2015, Viking introduced its first ocean ship with the christening of the 930-guest all-veranda Viking Star. One year later, Viking launched its second ocean ship, Viking Sea, which was joined in 2017 by sister ships Viking Sky and Viking Sun. In 2018, the fleet welcomes Viking Orion and an additional sister ship in 2019, making Viking the largest small ship ocean cruise line. Two more yet-to-be-named ships are scheduled to launch by 2022.

The company’s award-winning ships are engineered at a size that allows direct access into most ports, so guests have easy and efficient embarkation and disembarkation. Each ship boasts a private veranda in every stateroom, a choice of restaurants offering a variety of fine dining options, the most al fresco dining at sea, an infinity pool, a Nordic-inspired spa, panoramic Explorers’ Lounge and thoughtfully curated book collections throughout the ship, and more—all designed in understated elegance.