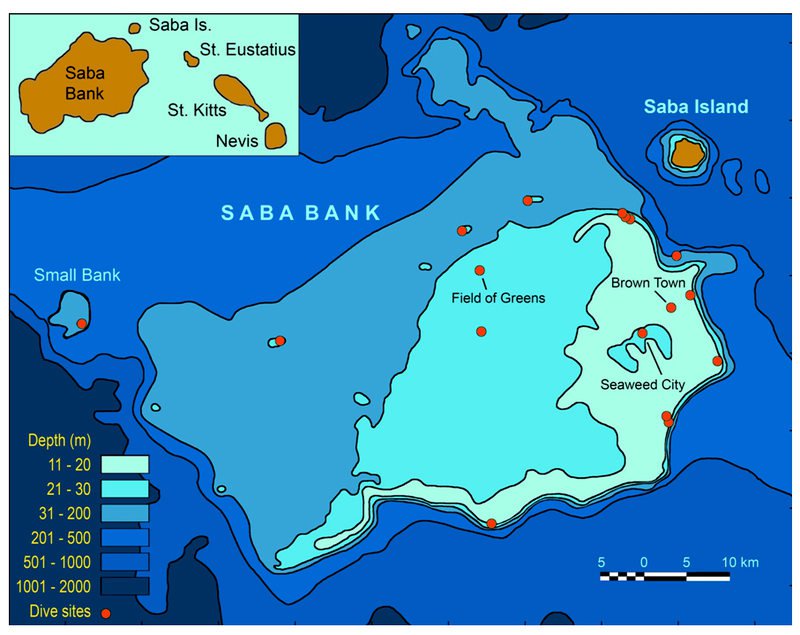 THE HAGUE–Violations by the maritime sector at the Saba Bank remain a problem. Ship owners keep trespassing in the restricted area, and the number of violations has not decreased last year. The Dutch Caribbean Coast Guard wants harsher measures against multiple offenders.

The trend in which authorities noted a 50 per cent decline in the number of violations did not continue in 2016. Both in 2015 and 2016 the Coast Guard issued 16 reports (“processen-verbaal”) to vessels that violated the restricted zone at the Saba Bank.

The Saba Bank is the largest submarine atoll in the Atlantic Ocean and the third largest of its kind in the world with some of the richest diversity of marine life in the Caribbean Sea. The area of approximately 2,500 square kilometres has the status of a national park and is protected by law. The majority of the Saba Bank has a depth of less than 50 metres.

Tankers and other large ships are prohibited on the Saba Bank, both in territorial waters and in the European Economic Zone (EEZ), with a few exceptions such as hydrographic survey vessels, salvage vessels, search and rescue vessels, and fishing boats from Saba, St. Eustatius, and St. Maarten with a permit to fish on the Saba Bank. The Coast Guard enforces this prohibition.

The majority of the transgressors indicated that they were unaware of the prohibition to pass over the Saba Bank, even though the area has been clearly marked in the updated electronic maritime charts since early 2016, it was stated in the 2016 Annual Report of the Dutch Caribbean Coast Guard released this week.

The Coast Guard will advise the Dutch Ministry of Infrastructure and Environment I&M to increase the public awareness that it is prohibited to pass over the Saba Bank, which is a protected area. The Coast Guard recommended involving the Dutch Caribbean Nature Alliance in the awareness campaign in the media.

It was further stated in the annual report of the Coast Guard that the Prosecutor’s Office sends the ship-owners that were found to be in violation a letter that indicates the maximum punishment for transgressions at the Saba Bank.

“The ship owners don’t take this lightly. The ship owners are not prosecuted once it is clear for the Prosecutor’s Office that the stern warning was well-understood and that the vessels’ owners have taken measures to prevent subsequent violations,” it was stated.

However, there should be no mercy for those ship owners who repeatedly violate the Saba Bank regulations. The Coast Guard wants ship owners who are guilty of multiple violations to approve a settlement proposal this year. Prosecution will ensue in case the ship owners don’t approve this proposal.

The introduction of a Very High Frequency VHF-system in Saba should make it easier for the Coast Guard’s Joint Rescue and Coordination Centre to warn captains that they are about to enter a prohibited area and that they should adapt their course. There is no VHF-system in the Windward Islands at this time. This system is only operational in Aruba, Curaçao and Bonaire.

The station for the Automatic Identification System (AIS) in St. Kitts didn’t materialise in 2016. Dutch authorities will continue working this year on the project to purchase the necessary hardware for the AIS system and to realise the data connection between St. Kitts and Curaçao.

The objective of this project is to expand and increase the coverage near St. Eustatius and Saba through the use of an antenna location in St. Kitts.