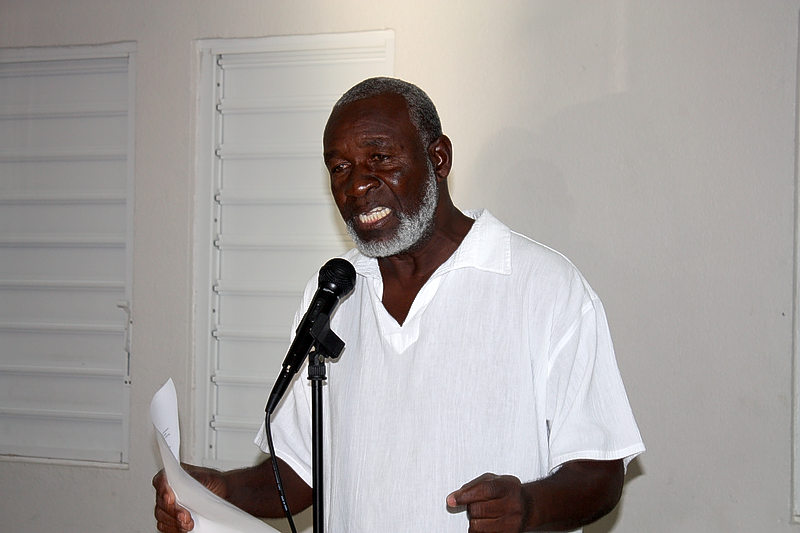 MARIGOT–In the light of the sporadic violence that affects the territory, particularly among young people, and highlighted by shocking events that made front page news in July, Association Sandy Ground on the Move Insertion plans to organise a roundtable discussion in September, to find alternative solutions to reducing violence in St. Martin.

This was announced at a press conference Friday, with District Council Six representative Georges Richardson and Director of Sandy Ground on the Move Insertion Marjorie Antoine. Elected officials from the Collectivité, Préfecture, justice system, as well as representatives from national education and social organisations will be invited.

“Not a day goes past without some form of violence, delinquency or act of aggression happening,” said Richardson. “The roundtable will identify causes of violence and propose solutions to this phenomenon. Everybody has to come together on this.”

Antoine noted following the roundtable a calendar will be developed to assign concrete actions to be undertaken.

“Young people are becoming more and more disillusioned,” observed Richardson. “We need to understand what needs to be done because the image and the character of this country are at stake. A solution is in the hands of every law-abiding citizen, not just the authorities. We have to brain storm to find a way forward.”

He said violence and problems with young people is certainly not new.

“A study was done sometime in 2004 that showed 22 per cent of young people had mental problems. God knows how much higher that percentage must be now in 2016, because the country is going through all sorts of heartaches.

“We depend primarily on tourism,” he continued. “Tourists want to see good manners and smiles on our faces, but at times there is too much negativity. We need to change negativity to positivity. The youth belong to all of us, they are our children. Letting France decide for us can’t work. We are the ones to tell the State the situation to plan the way forward. To me, insertion needs to be much more broad-based than it is currently. We need to have the ability to employ more young people. “

He noted his association employs 66 young people, but said that is a drop in the ocean compared to how many young people are out there needing employment or direction.

“Come September, a great many of the youth will not be going back to school and that again is a burden on the parents. The devil finds work for idle hands to do.”

Richardson said he was in favour of a prison in St. Martin, but also with specialised educational facilities that give young people a chance at getting a job.

“A prison should not be just a lock-up, but a place where a young person can be assessed and studied to find out the root causes of his problems. If we don’t do that we are not going anywhere.”

Commenting on the Mathieu Carty murder in a Guadeloupe prison, Richardson said serious questions need to be asked as to why Carty was free to roam around in St. Martin while obviously mentally unstable and not in a secure facility.

“I get the impression authorities felt that what happened to him was a good thing, and that is not going down well with the population. After all, he was a son of the soil.”

Source: Daily Herald
Violence to be discussed at roundtable in September