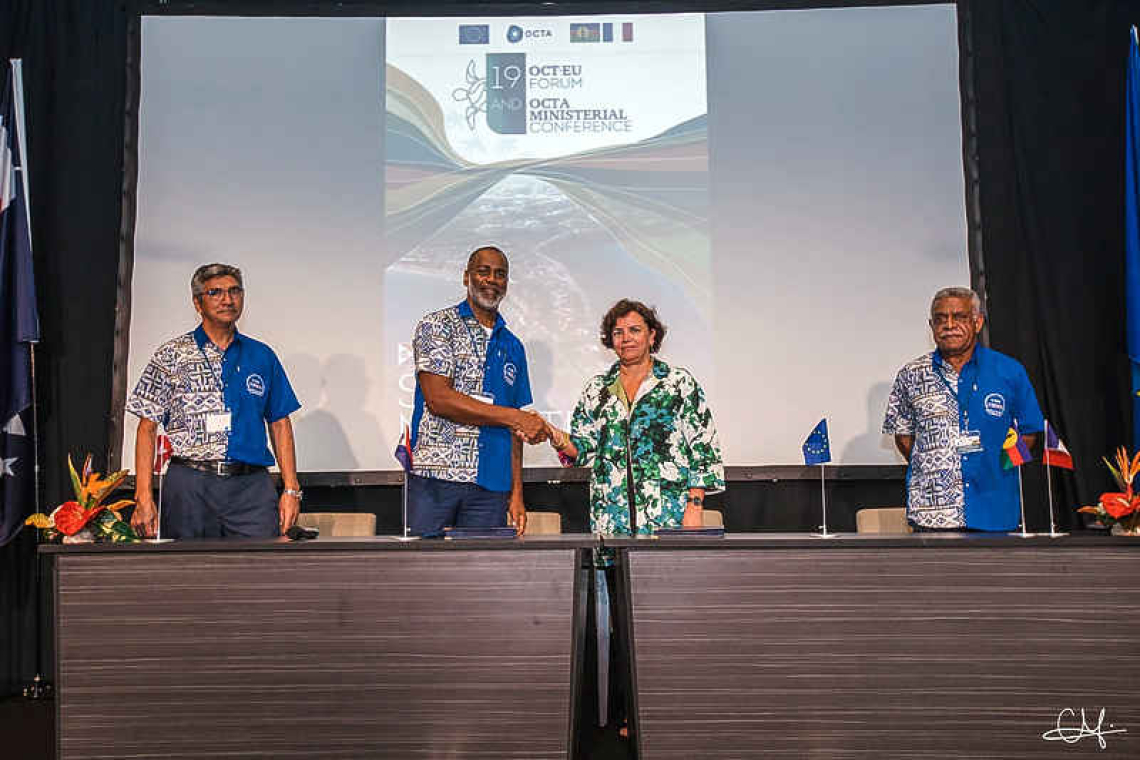 The delegation consisted of EU representative for St. Maarten and Director at the Cabinet of the Minister Plenipotentiary Carol Voges and Senior Policy advisor at the Department of Interior and Kingdom Relations BAK Nikima Hickinson.

The Ministerial Conference is OCTA’s highest governing body and establishes the mandate to the executive committee for the next 12 months. During the conference, the OCTA financial statements for the years 2021-2022 and annual report were also presented.

The exchanges between the representatives of the 13 European OCTs mainly focused on the evolution of OCTA’s governance as well as on the results and prospects of the partnership with the European Union post-2021. The agreements were outlined in the OCTA political declaration and presented to the European Commission during the EU-OCT Forum.

Noteworthy elements of the declaration were reaffirming the need to closely involve the OCTs in the post-Cotonou agreement, with due regard to their observer status, and in the EU’s regional partnerships with the OCTs’ neighbours. Moreover, the importance of the regional programming process, and having better-adapted and strengthened cooperation tools and mechanisms that contribute to the OCTs’ regional cooperation with the African, Caribbean and Pacific group of states (ACP), the Outermost Regions, regional organisations and other territories, for greater development and complementarity of action between countries within the same group, was reiterated.

Additionally, the key role that the OCTs have to play in the context of the Green Deal for Europe was underlined, for instance, regarding biodiversity protection or clean energy transitions, whereby the European Commission was strongly encouraged to develop flagship initiatives or projects dedicated to archipelagos, including the OCTs, such as the “Clean Energy for Islands” initiative.

During the conference, the election for the chairmanship of the Ministerial Conference and membership of the Executive Committee also took place. Greenland was elected Chair and Aruba was elected Vice Chair of the Ministerial Conference. The Executive Committee members for the coming year were also elected, with the EU representative for Curaçao being elected President and St. Maarten’s EU representative being elected to the position of Vice President.

The Ministerial Conference was also updated on the status of various EU-funded programmes, such as Archipel.eu, the GO programme and the Caribbean, Pacific and Indian Ocean Regional programmes under the 11th European Development Fund (EDF), whereby St. Maarten as the Regional Authorising Officer (RAO) presented the update for the Caribbean programme during a workshop held on November 19.

Finally, during the EU-OCT Forum, Violenus signed the multiannual indicative programme (MIP) for the programming period 2021-2027 on behalf of the government of St. Maarten. The selected focus area for the MIP is sustainable and resilient energy with an amount of 7.7 million euros being allocated to the future programme.