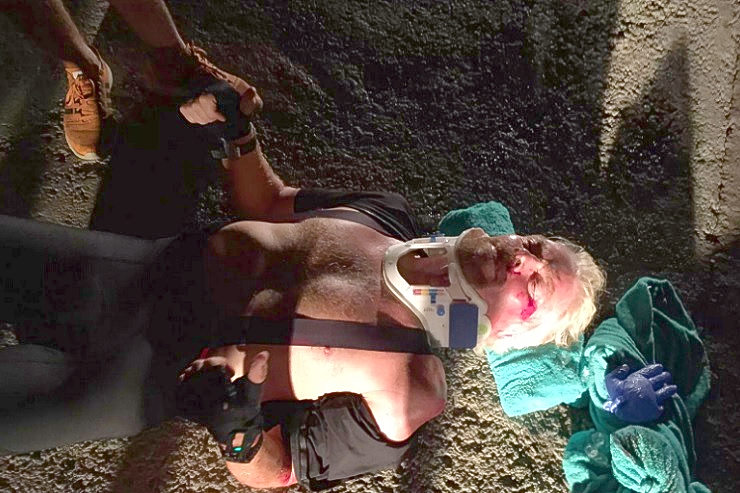 VIRGIN GORDA, BVI–Sir Richard Branson saw “his life flash before my eyes” during a bike crash close to a cliff edge that left him needing hospital treatment.

The founder of Virgin Group, which comprises more than 400 companies, suffered a badly damaged cheek and severe cuts to his body after crashing his bicycle during training on the island of Virgin Gorda.

Dramatic photos from the incident show a bloodied and bruised Sir Richard receiving emergency treatment at the scene after he missed a bump in the road and was thrust into the air, over the handlebars and onto the concrete.

“The next thing I knew, I was being hurled over the handlebars and my life was literally flashing before my eyes,” he wrote in his blog. “I really thought I was going to die. I went flying head-first towards the concrete road, but fortunately my shoulder and cheek took the brunt of the impact, and I was wearing a helmet that saved my life” he wrote.

“My bike went flying off the cliff and disappeared. We’ve since recovered the crumpled bicycle, completely destroyed. My cheek has been badly damaged and my knee, chin, shoulder and body severely cut.”

Branson was cycling with his children Holly and Sam as part of his training for the Virgin Strive Challenge endurance event from the base of the Matterhorn in the Alps to the summit of Mount Etna in Sicily. He still hopes to take part in the event.

“My attitude has always been, if you fall flat on your face, at least you’re moving forward,” he said. “All you have to do is get back up and try again. At least I’m practicing what I preach – though a little too literally!”