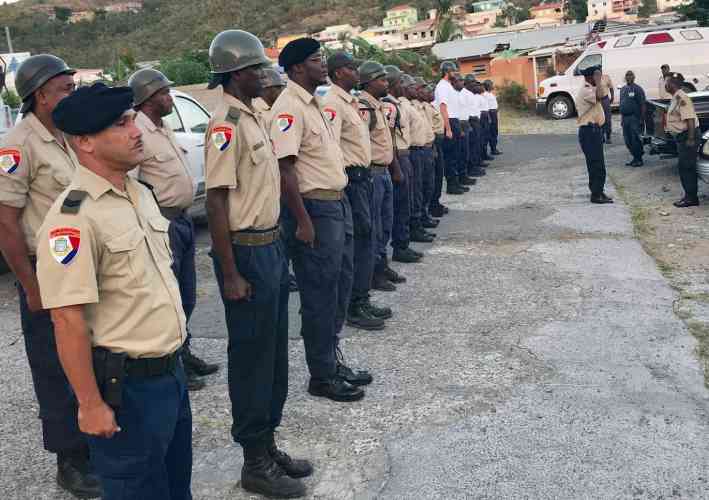 MADAME ESTATE–Volunteer Corps of St. Maarten VKS held a field training exercise known as a bivouac during the past week as part of ongoing training for its members.

The word “bivouac” is a common military term believed to originate in the Swiss-German language but spelled according to French grammar since the early 18th century, when temporary encampments were set up for security of villages.

There is currently an ongoing training course of 17 new recruits, known in Dutch as “aspirants,” within the organisation.

Additionally, 15 existing soldiers within the VKS were training for a promotion to the rank of Soldier First Class (“Soldat Eerste Klasse”). The training started at the VKS office in Madame Estate on Friday afternoon, where participants were placed into teams, equipped themselves, and travelled on foot from Madame estate to a campsite in Little Bay.

At that site they set up large tents as a base of operations. A map reading exercise followed that led them on foot to Philipsburg where they practiced how to conduct vehicle checkpoints. Returning to the base at 2:30am, they were tasked with guarding the base against possible attacks and then after an hour of sleep started the next day.

Saturday morning involved a mountain march “bergmars” from Cake House Road along the ridge line of the mountains up to the peak of Sentry Hill and then down to Emilio Wilson Estate where they practiced traversing along ropes.

Following that event, members travelled to Pond Island to practice riot formations and tactics using shields, batons and helmets, with the effort being to resist stress and maintain composure at all times.

Later on the same day. members marched to the Simpson Bay police station to practice arrest techniques and returned to the base camp for more guarding duties, responding to simulated attacks on the base.

On Sunday the group had physical exercises at 5:00am and then disassembled the base camp and headed to Gibbs Bay for practice in tactical building entry and rappelling off of buildings. The final exercise consisted of marching through heavy surf on Simpson Bay Beach carrying wooden logs and, on completion, a team run back to Kim Sha Beach.

At Kim Sha beach, the VKS commander Major Antonio Rogers addressed the combined group of 55 volunteer soldiers and recruits and noted the high level of dedication and teamwork shown by them under stress.

One of the reasons the recruits have shown exemplary teamwork was the situation they came into in September last year. They had signed up to join the VKS and completed their entry screening just prior to Hurricane Irma. Immediately after the storm the tri-weekly training classes were temporarily cancelled and the recruits were called in to assist the VKS with the distribution of food and supplies, and cleaning up of schools and offices within the Justice Department.

This addition of aspirants’ manpower for humanitarian relief efforts helped free up more advanced VKS members to serve with police and in securing the streets. Although the hurricane delayed the start date of their classes, many of the aspirants proved their dedication to the organisation via hard work and sacrifices during that difficult time.