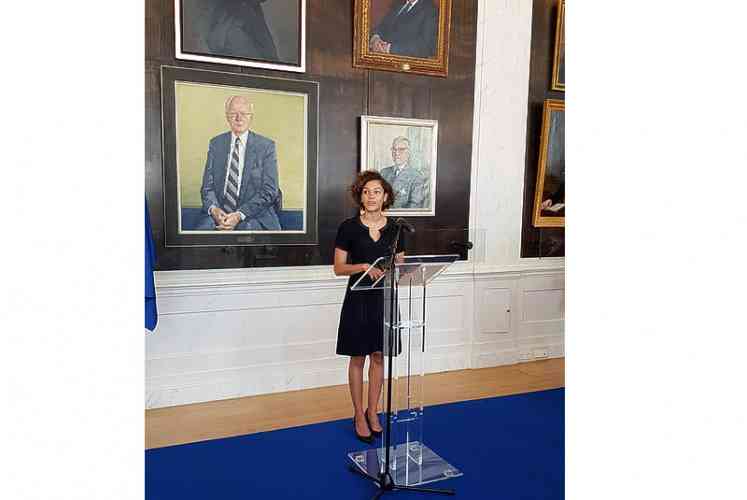 PHILIPSBURG–Local artist Ruby Bute’s artwork entitled “185 miles wind” made its long-anticipated arrival in the chambers of the Dutch Second Chamber of Parliament in The Hague, the Netherlands, on June 25.

After having been displayed at the Council of State, the National Red Cross, UNICEF and at various Ministries in The Hague, the painting will now be on public display at the Second Chamber for 18 months.

Minister Plenipotentiary Jorien Wuite in her address during the reception on the occasion of the Inter Parliamentary Kingdom Consultations IPKO gave an outline of the progress and developments since 2017 and emphasized the need for continued dialogue and understanding within the Kingdom.

Wuite said that even though the St. Maarten IPKO delegates were not present at this meeting, St. Maarten was symbolically represented through Bute’s artwork and the members of the cabinet. Wuite said this signals support for the deliberations that began on that day.

Similar to Second Chamber chairwoman Khadija Arib, she further referred to the significance of art and culture uniting nations, especially in the current landscape within the Kingdom, where all are called to work diligently, securely and in the interest of the countries constituting the Kingdom, it was stated in a press release on Thursday.

Wuite’s reference to the fact that she was exactly one year in this function in the Netherlands, and that she was pleased to see this initiative, triggered through her conversation with Bute in June 2018 prior to her departure, materialise.

As Wuite considers cultural diplomacy and the younger St. Maarten generation of importance in her tasks of representation and kingdom relations, she introduced young professional Carla Vlaun to the parliamentarians in the Second Chamber.

Vlaun, who completed her Master’s degree in International Affairs at the Graduate Institute of International and Development Studies, presented her thesis “Tis We ting, All Ah We,” with a special analysis of the historical development of Carnival, the construction of identity and the role of government in the formation and promotion of such identities.

In her brief address to the gathering, Vlaun narrated the origin of Carnival in St. Maarten, the importance of the carnival spirit to both Caribbean and national identity, and the ambition of preserving and documenting one’s cultural heritage.

The role and position of government cannot be understood without these reflections on identity and the practice of carnival, the release said. Vlaun, using parts of her thesis, awed those present with her eloquent and persuasive delivery, it stated.

Vlaun will return to St. Maarten this summer to further her career and considered the presentation at the Second Chamber to be a great opportunity as well as a wonderful manner to conclude her years of work and study in the Netherlands and Europe.

The painting was unveiled after Wuite’s and Vlaun’s addresses, after which toasts were made to a successful IPKO and to St. Maarten for “this wonderful gesture.”

The painting will be on public display at the Second Chamber for 18 months. Second Chamber Chairwoman Khadija Arib thanked St. Maarten for the gesture, which she said was deeply appreciated.

Wuite recognised Kingdom Relations Committee former chairman Alexander Pechtold, who made this happen through his role as chair of the Second Chamber Art Committee.