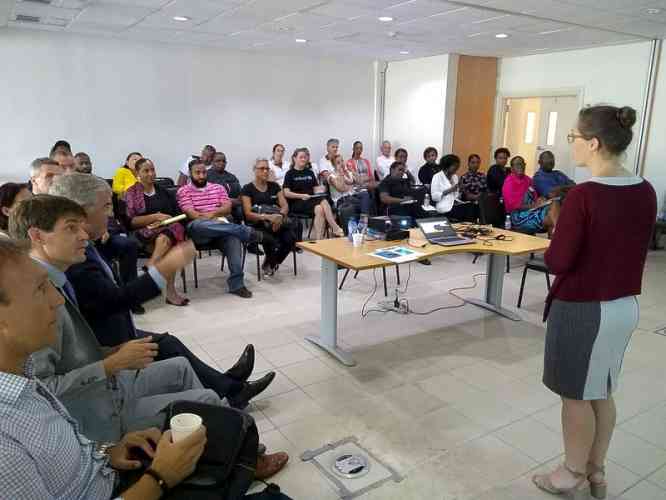 A scene during the table-top exercise.

The table-top exercise followed workshops held in May and June for Emergency Support Function (ESF) 7 on evacuation, shelters, relief and mass care.

Robijn and Baardwijk were supported by Professor Zoran Vojinovic of IHE Delft, an international research and education institute on water management.

The goal of the table-top exercise was to finalise the disaster plan for ESF7, developed by the Dutch experts of VNG International in cooperation with the Ministry of Health, Labour and Social Affairs VSA of St. Maarten. The plan, including the new Emergency Management Structure and the task charts, was tested during the table-top exercise.

Vojinovich used simulation models to show what impact the scenarios had on the island. A tsunami alert gave participants the opportunity to prepare for evacuation, sheltering and distribution of food and water. In the second phase of the exercise a tsunami hit the island and devastated 50 per cent of the infrastructure, and there were multiple casualties. Participants dealt with many challenges and tried to help out as many people as possible.

Participants showed involvement, commitment, strength and knowledge of their tasks.

“Choosing a different kind of risk by working out a scenario of a tsunami made everyone realise that the current draft of the disaster plan should contain the possibilities of handling different kinds of scenarios, instead of mainly focussing on hurricanes,” it was stated in a press release on Thursday.

The next step will be to finalise and formalise the disaster plan. An extended exercise with multiple ESFs will be held in November. The disaster plan for ESF 7 should be ready to work with by then, it was stated in the release.

Additional information can be obtained by contacting VNG International: