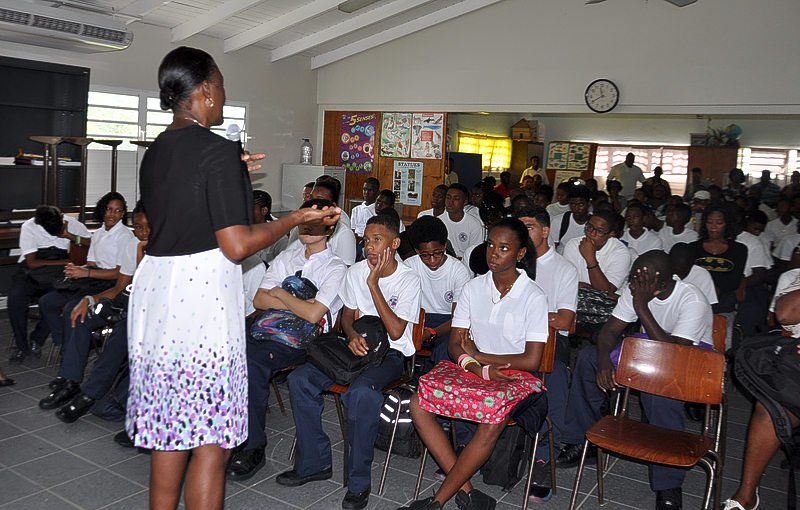 SOUTH REWARD–St. Maarten Vocational Training School (SMVTS) students will be sporting new uniforms this school year as part of efforts by the institution to change the image of the school, and rebrand the institution.

The new uniforms consist of salmon shirts and navy blue pants. SMVTS’ principal Rita Bourne-Gumbs said the shipment of the school tops has been delayed, and will be on island by the beginning of September. The uniforms will be distributed by Penny’s Department Store. As the new uniforms have not yet arrived, students sported white shirts and their new school pants at the start of the new academic year on Monday. Bourne-Gumbs said this was to minimise the expense on parents. Students, she said, have been asking to change the colour of the uniform for quite some time now, and the school has delivered.

SMVTS’ building was also repainted in new colours. The previously dark grey-coloured building has been changed to light green, salmon and blue, in keeping with the new uniform colours.

The school reopened at full capacity with 80 new students and has a total student population of some 250. Head of Public Education Glenderlin Davis-Holiday visited the school during its first assembly for the new academic year on Monday, and delivered a pep talk to students. She told students that irrespective of what they had heard about the school, or what others have told them, they are a fortunate group of students. She said the institution is equipped with educators, who are competent and passionate about their work.

It’s not easy to teach a trade, she noted, urging students to focus on what they can do best and to learn all they need to learn. If St. Maarten is not equipped with tradesmen and women, then the island will “fall apart,” she noted. Davis-Holiday also told students that National Institute for Professional Advancement (NIPA) is an option for them to consider after they complete their education at SMVTS. Parents were also encouraged to be involved and to visit the school and ask questions if they have concerns or queries.

Bourne-Gumbs, a former Education Minister, had echoed similar sentiments in her pep talk to students when she told them to be their best, and to portray themselves and their school in a positive light. “I want no one to say bad things about the school… what people say about us is what we are – so if they say good things, it’s because we are doing good things,” she said, urging students to wear their uniform and to conduct themselves with pride.

She told this newspaper later in the day that efforts are underway to rebrand the school. The school plans to have students engaged in numerous workshops to help guide them into the field they want to study. As a result, many professionals will be brought into the school to speak to students. Students will also be taken on field trips. After the first and second forms at SMVTS, students are usually streamed into their specific field of study at SMVTS and these activities are expected to help them to make a proper decision of which field they should enter.

The school is also expected to introduce agriculture as a subject this year, an effort which it had hoped to introduce during the last school year, but this did not materialise. A new school development plan is also being developed. Textile is another area that the principal is hoping to also reintroduce. Students have also been requesting Dutch lessons and the school is looking into this possibility.

Another goal of the school is to start various sports teams, such as basketball, swimming and volleyball, etc. since students are talented and strong in sports. “The students have talents and we want to give them the exposure, so that they can feel good about themselves.”

The school has also identified “Dependability” as its theme and is working on a slogan that fits with this word.