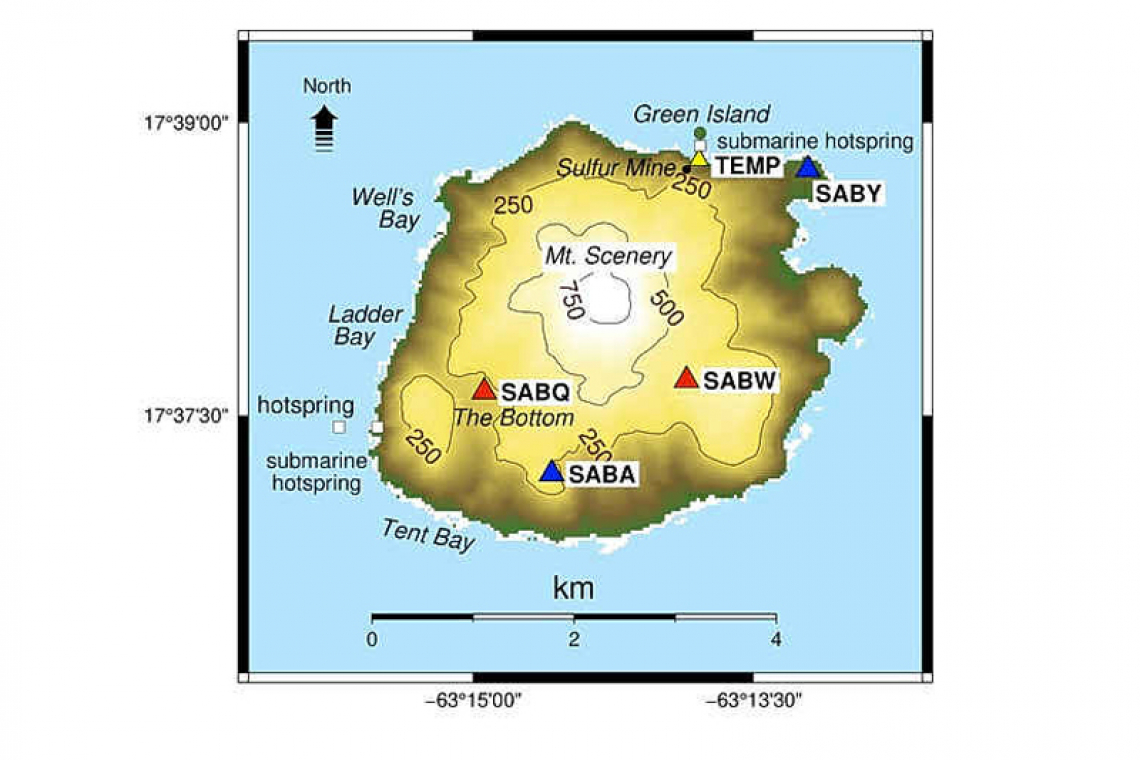 SABA–The Royal Netherlands Meteorological Institute KNMI continues its volcanic/seismic monitoring work in Saba despite the challenges of the COVID-19 pandemic with associated travel restrictions and delayed delivery of new equipment.

KNMI experts will return to the island in April to collect data and to inspect and where necessary, repair monitoring equipment. Also, a new Global Navigation Satellite System (GNSS)/seismic monitoring station will be installed on the north coast.

KNMI volcanologist Elske De Zeeuw-van Dalfsen and seismologist Reinoud Sleeman explained that seismometers “SABY” at the airport, “SABW” in Windwardside and “SABA” at St. John’s are functioning well and produce data of good quality for the purpose of detecting earthquakes. The fourth seismometer “SABQ” in The Bottom is currently not functioning due to technical issues and is awaiting repair by the manufacturer.

The two GNSS stations in St. John’s and at the airport worked well for most of 2020. For each instrument, the KNMI calculates the daily position very precisely.

The GNSS station in St. John’s has been operational since January 2018 and the one at the airport since February 2019. In January 2020, the KNMI installed a global positioning system (GPS) receiver in The Bottom. This instrument measures its precise location on the ground, allowing tracking of its movement.

The new GNSS/seismic station at Grey Hill, along the north coast, is planned for April 2021. The equipment and construction materials will be shipped to Saba in February. This installation, unlike the other GNSS/seismic equipment, will be completely stand-alone. Satellite communication will be used to send data to the KNMI and solar panels and batteries will be used to power this site in this uninhabited area.

In March 2020, a member of the public reported multiple cracks in the area of Green Gut along the road between English Quarter and Hell’s Gate. The crack along the wall was 60 centimetres deep and had warm, moist air venting from it at about 50 degrees Celsius.

Green Gut is an unstable area, but the warm air is unusual. It may be that compaction and rotting of waste causes heat to form.

There is always the possibility that the volcano is forming a vent, or already had it there in the past. If this is the case the temperatures are still relatively low and there is no other evidence of volcanic origin, like sulphur or other mineral deposits. The KNMI experts will bring a thermal camera to closely inspect the area during the next visit.

In March 2020, Saba Conservation Foundation (SCF) rangers reported dead mountain mahogany trees in an area of 10 by 10 square metres close to the top of Mt. Scenery.

An SCF team under the guidance of the KNMI investigated the area for other signs of volcanic activity such as volcanic deposits of ash and sulphur, or fumes and heat release. No such evidence was found, suggesting volcanic activity did not cause the trees to die. SCF captured photos and videos for future reference. A new photo and video survey in January 2021 clearly showed the regrowth of vegetation, confirming that there is no volcanic activity in the area.

In its update, the KNMI also addressed the increased levels of activity of several volcanoes in the Caribbean. It was explained that the Caribbean volcanoes were all formed by the same process: subduction at the plate boundary. However, the volcanoes do not share the same magma chamber, nor are they connected by long magma conduits. A volcanic eruption on one island can, therefore, not trigger an eruption on another island, the KNMI assured.