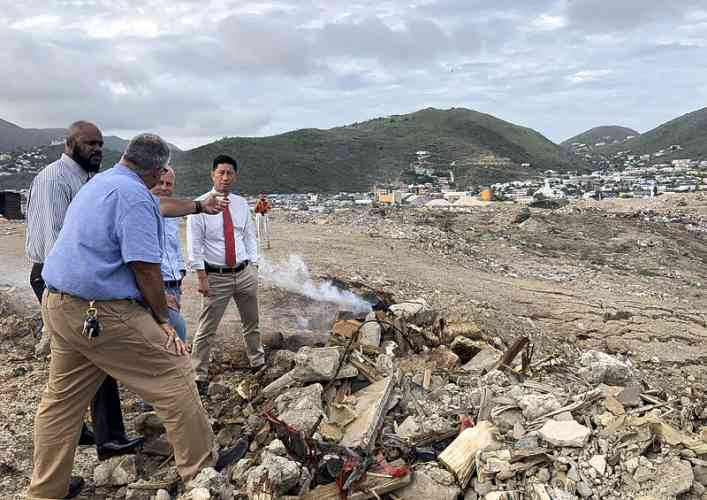 THE HAGUE–Toxic fumes such as carbon monoxide, hydrogen sulphide and volatile organic agents exceed the limits at the St. Maarten waste disposal site, commonly known as the dump. And, according to the Dutch newspaper de Volkskrant, the St. Maarten government has kept this information secret.

“St. Maarten silent about toxic fumes on dump,” stated the headline above the article in Monday’s edition of de Volkskrant, in which Curaçao correspondent Kees Broere claimed to have documents to prove this. The documents have not been made public.

Measurements of the air quality and fumes were taken at the dump during the visit of renowned American expert Todd Thalhamer to St. Maarten about two months ago, on the invitation of the World Bank. The concentration of the toxic fumes exceeds the limits, which means that they are harmful to the public health.

Thalhamer, who confirmed that the toxic fumes were detected, informed the St. Maarten government that with thorough planning it was possible to end the fires at the dump. The World Bank is working on a project to urgently remove waste from the site and to stop the continuous fires. This project should receive the green light in the coming months, a spokesperson told de Volkskrant.

The newspaper also cited Professor Martin van den Berg, who teaches toxicology at University of Utrecht in the Netherlands. Referring to the findings of the investigation of the toxic fumes, he said that people should not be in or around these fumes without a gas mask or other protective measures to prevent inhalation. However, people are working on the dump without the necessary protection.

The St. Maarten government has plans for a waste-to-energy plant. The American company EnviroPower recently gave a presentation in the St. Maarten Parliament. According to critics, this plan does not address the urgent, hazardous public health situation the dump continues to cause.

Van den Berg said that burning waste in a professional installation was always better than having open fires. He said that until the waste burner is installed, something had to happen to prevent the toxic fumes and the spreading of diseases. He advised only burning waste when the wind is blowing towards the sea. However, in practice this appears highly unlikely.

The de Volkskrant article mentioned the court injunction initiated by some citizens and supported by the Prosecutor’s Office. The plaintiffs demand that authorities put an end to the fires and they have also requested the data of the investigation of the toxic fumes.

Alarmed by the newspaper article, Member of the Second Chamber of the Dutch Parliament Nevin Özütok of the green left party GroenLinks has decided to seek clarity from the Dutch government. She filed a request on Monday to pose questions during the so-called verbal question hour in Parliament today, Tuesday. If this does not go through, she will submit written questions.