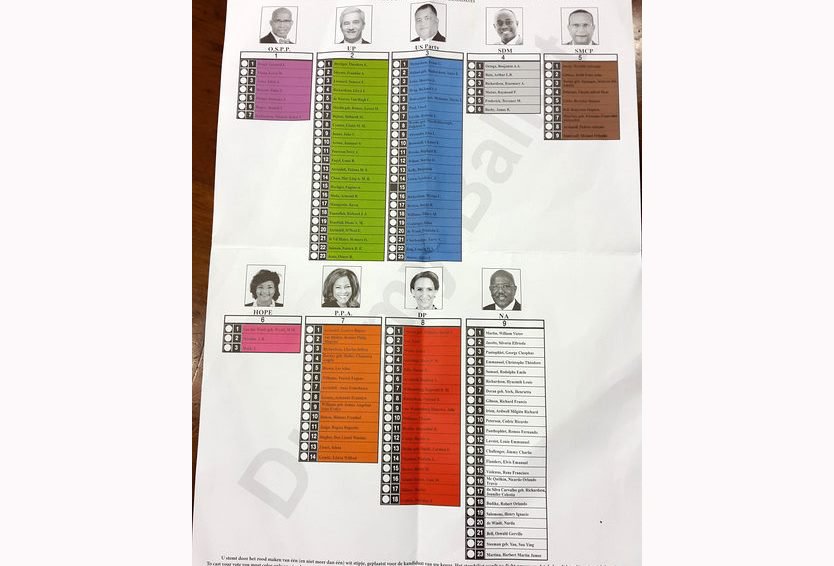 ~ GEBE to give flashlights to polling stations ~

PHILIPSBURG–Cast your ballot earlier, do not wait until the last hour of voting to head the polling station come Election Day on September 26, urged the Main Voting Bureau and police on Thursday. Voting earlier will ensure reduced traffic congestion, avoid any hiccup and allow results to be issued in a timely manner. The twenty polling stations will open at 8:00am and close at 8:00pm.

Police Chief Inspector Benjamin Gout echoed Rogers’ sentiment. He called on people “to vote in the morning hours” when the stations are quieter. “It is a habit to go to vote at the last hour. … Anything can happen” later in the day, so it is better to vote early, he said.

When polls close, a police or VKS officer will stand behind the last person in line to close off the queue.

Police Chief Carl John said, “If we can have a cool and quiet election that would be good.”

All police officers will be on duty with support from some 30 Voluntary Corps St. Maarten VKS officers. They will be stationed at each polling station and will carry out normal patrols and work.

John also pointed out that traffic “will be a challenge” and called on voters to adhere to the call to vote early.

Going to the polls early is doubly important as 13 of the 20 stations have more than 1,000 assigned voters. The Electoral Law only allows for a maximum of 1,500 voters at each polling station.

Employees are entitled to only two hours off work to vote if they are not able to vote outside of their normal working hours.

With no law in place to ban mobile phones, Rogers said it was “kind of impossible” to keep them out of polling stations. However, the station chairperson can decide, based on the prevailing situation, to limit phones coming into the polling station.

This is a vastly different approach from the election guideline established by Justice Minister Edson Kirindongo last month. That guideline states that mobile phones are “strictly prohibited” in polling stations and metal detectors will be used to ferret out hidden phones.

Gout, asked about metal detectors, said: “We don’t have that many detectors.”

A total of 1,292 voting cards were returned to the Civil Registry on Thursday by the Post Office. Those cards along with a number returned by residents that belong to people who have moved to a new address will be available for pick-up in person at the Department as of Monday, said Kathy Snijders of the Civil Registry.

Cards can be collected and identification cards, passports and drivers’ licences renewed during the Civil Registry’s normal opening hours: 8:00am to 3:00pm on all weekdays except Wednesday when the opening time is 8:00am to 12:30pm. Additional opening hours as of Monday to facilitate the election process are from 5:00pm to 7:00pm, except on Friday.

People who have not updated their address at the Civil Registry are urged to take a utilities bill or a copy of their lease/deed when picking up their voting cards. Snijders reminded residents that the law require a change of address to be logged with the Civil Registry within five working days after moving.

Utilities company GEBE has made provision for continuous lights at all polling stations on Election Day.

GEBE Interim Managing Director Kenrick Chittick said the company was working to keep all equipment up to date and that all engines were “optimal.” One engine is slated for an overhaul, but this has been postponed to have it ready in the case it needs to go online.

Should the power go out, all polling stations will have a light hooked up to a battery power supply.

All polling stations will also be outfitted with flashlights in case of an emergency.

This is the first election such emphasis has been placed on making sure there are continuous lights at the polling stations. This stems from the intermittent power outages the country has been facing since late last year.

Election-night coverage will be aired from Parliament House, not Dr. A.C. Wathey Legislative Hall as traditionally had been done. Rogers explained the move was reflective of the kind of election it is – one for members of Parliament – while the Government Administration Building is the seat of the executive branch, which is the Council of Ministers.

Department of Communications Head Rodney Richardson said hourly updates on voter turnout and, after the polls close, announcement of the results will be made via St. Maarten Cable TV Channel 120.

Live broadcast of the Election Night Watch will commence at 8:00pm. Edgardo Lynch of the programme said it will be hosted by Gina Bruney and Henry Lynch.

Two large screens will be placed on Cyrus Wathey Square for the public to view the live broadcast. The screens were in front of the Government Administration Building in the past.