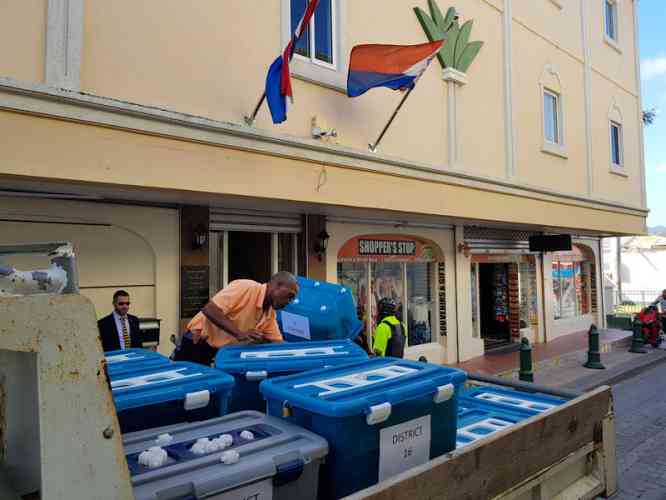 PHILIPSBURG–A total recount of three polling stations was completed by the Central Voting Bureau early Monday afternoon. The recount corrected errors and awarded additional votes to several candidates on five of the six parties’ slates, but no change so far has been significant enough to affect the outcome of the February 26 snap election.

A partial recount of ballots cast in five other polling stations still has to be completed, due to starting after a lunch break at 3:00pm Monday. This did not happen, due to a power outage in Philipsburg that affected Parliament House, the venue of the Bureau’s public sitting. The building, sections of which are rented by Government to house the legislature, does not have a generator.
The Voting Bureau ruled earlier on Monday to recount the three districts – #10 National Institute for Professional Advancement (NIPA) in Cay Hill, #15 Melford Hazel Sports and Recreational Centre in Sucker Garden and #18 the Seventh-Day Adventist School in Cole Bay.
The reasons for the total recount of the three districts were the same: the tally sheets were missing from the package submitted by the polling station chairperson to the Bureau after the ballots were counted. The tally sheet is needed by the Bureau to compare with the “proces verbaal” of the chairperson. This check could not be carried out on election night, because the boxes containing the ballots could only be opened in a public sitting of the Bureau. That sitting started Monday morning in Parliament House.
Polling station #10 had one of the highest numbers of invalid ballots. The station staff marked all ballots with an “x” or a checkmark as invalid; the Bureau ruled 16 of the 34 valid. Five votes each were picked up by United Democrats and National Alliance (NA), and three each by United St. Maarten Party (US Party) and St. Maarten Christian Party (SMCP). This polling station had some creative voters who wrote and scratched up their ballots rendering them invalid.
In polling station #15 four valid ballots were deemed invalid by the Bureau due to different errors, including one for NA candidate Leonard “Lenny” Priest. The voter drew an “o” and a “v” next to his name but did not colour the circle. Also losing a vote each were three party leaders – Theo Heyliger (United Democrats), Frans Richardson (US Party) and Wycliffe Smith (SMCP). None of the invalid ballots from this polling station were deemed valid.
At polling station #18, one invalid ballot was ruled valid and went to People’s Progressive Alliance (PPA). The tally for NA went down by one vote to 154. The recount found that former Minister Christophe Emmanuel was logged as having 19 votes when the ballots only tallied to 18. A shift of votes was recorded on the US Party slate – four votes for Lyndon Lewis were recorded for Richinel Brug. The final count from that station now has Brug at zero and Lewis at four votes.
Two “void” ballots were recorded at this polling station. These were ballots voters returned to polling station staff after making an error. The voters were issued new ballots. The law allows for a voter to request a second ballot if he or she made a mistake on the original one.

Partial recount
The Voting Bureau resumes its sitting this morning with the partial recount of polling stations #5 Dutch Quarter Community Centre, #7 Rupert I. Maynard Youth Community Centre in St. Peters, #8 St. Maarten Academy in St. Peters, #14 Belvedere Community 4Centre and #16 Methodist Agogic Centre in St. John’s Estate.
The partial recounts at these stations will target only a few candidates for whom the tally sheet count and the “proces verbaal” did not match. Common errors were two “sticks” on the tally sheet being recorded as the number 11 instead of the number two, and the votes for two candidates being inverted.
United Democrats President Stuart Johnson requested a total recount of all 20 polling stations at the start of the sitting. The Bureau ruled against his request.
Bureau Chairman Jason Rogers said no grounds were found for such an extensive recount.
Johnson cited in his objections, among other things, the lighting in polling stations and voters being turned away because they had no voting cards. Rogers said the lighting had no bearing on the voting count and the voting card issue had been resolved early in the day.
Johnson first made a verbal objection to the Bureau on behalf of the party’s board. However, he was informed the United Democrats board could not submit an objection, as the law only allows for a registered voter to file such. He amended his protest to file it as a voter.
United Democrats candidate current Member of Parliament Perry Geerlings, who missed re-election by two votes, also filed a verbal objection. He said aside from his personal interest in a recount, he was also concerned about the high number of invalid ballots. MP-elect present Public Health Minister Emil Lee earned 259 votes. Geerlings received 258 votes. Both candidates are from the United Democrats. Lee earned the last of the seven seats captured by the party a week ago.
Rogers told representatives of parties, candidates and other observers gathered for the public hearing that the Bureau had decided on the total and partial recounts of the eight polling stations following its meeting on Thursday. This fit in line with Geerlings’ request.