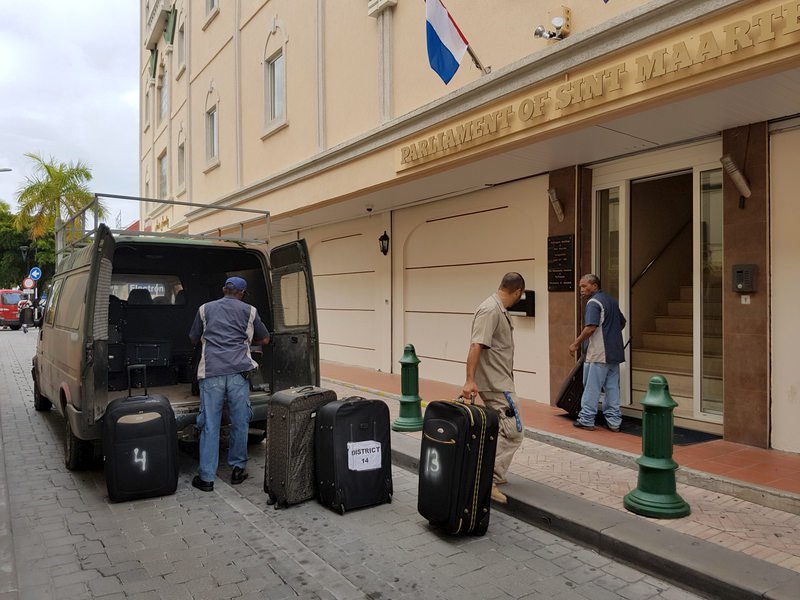 PHILIPSBURG–A recount of all ballots cast in the September 26 Parliamentary Elections started on Monday with several parties alternately picking up and losing a few votes in the five polling stations completed so far, but the differences have not been significant enough to affect the preliminary outcome of the elections.

Voting Bureau Chairman Jason Rogers said at the start of the Bureau’s public sitting to validate the results that a number of discrepancies were found in the official reports submitted by the chairpersons of some polling stations. Notably, one station recorded that a ballot was given to someone who had been “de-registered.”

That incident as well as other hiccups led the Bureau to decide “a recount was warranted and justified.” With that decision unanimously taken by the Bureau, none of the other objections from representatives of parties were handled as all of these also asked for a total recount and were thus voided by the Bureau’s decision.

Representatives of seven of the nine parties that contested the elections had requested a recount of all ballots in a letter sent to the Bureau on Friday.

Democratic Party (DP) leader Member of Parliament Sarah Wescot-Williams asked the Bureau to make all of the official reports from the polling stations public for all to see the discrepancies that led the Bureau to its recount decision. Rogers said a decision on this will be made after all ballots have been recounted.

The outcome of the elections saw five seats each allotted to the National Alliance (NA) and United People’s (UP) party, three to the United St. Maarten Party (US Party) and two to the Democratic Party (DP).

The recount of the remaining 15 polling stations will continue today, Tuesday, at 9:00am in Parliament House.

One interesting part of the recount so far is the seesaw of votes received by incumbent MP Tamara Leonard and her fellow UP candidate Jules James. They went into the recount with James one vote ahead. This changed to Leonard gaining a vote to equalize and then James losing one. At the close of the first day of recount, Leonard and James were again tied. Should this scenario remain – the two tied in votes – the UP’s fifth seat in Parliament will go to Leonard due to her number three position on the party’s slate compared to James at number nine.

The recount, a lengthy and tedious process, had its light moments particularly when the stack of invalid ballots were examined. On one ballot, the voter clearly selected Minister Plenipotentiary Henrietta Doran-York (NA), but didn’t stop; added in precise penmanship was “Love u Baby” next to her name. This rendered the ballot invalid as the Electoral Regulations clearly state the ballot must not be otherwise marked except for the filling in of the blank circle next to the preferred candidate.

Education Minister Silveria Jacobs (NA) also lost a vote in a similar way. The voter clearly chose her, but added to the ballot – “We all need Jesus.”

Two persons filled the circle next to their preferred candidates with black and blue pens. Others scratched up the ballots and yet others, coloured the name of the candidates, instead of the circle. UP candidate Sidharth Bijlani lost at least three votes in this way.

Several people took the time to vote for as many as all 125 candidates on the ballot when they were only to select one candidate.

A small number of ballots deemed valid by the polling stations on the night of elections were deemed invalid by the Bureau. One such instance was a ballot counted for Anna Rabess-Richardson (US Party), but it was found by the Bureau that the voter had also coloured in faintly the circle next to DP candidate Perry Geerlings.

The Bureau paid tribute to newsman the late Samuel Allen Jr. at the start of the sitting. Rogers described Allen Jr., who passed away suddenly on Saturday, as dedicated to informing the public and always being present for Bureau activities.

A video tribute showing photos of Allen Jr. at work and in his leisure time was viewed by everyone gathered in the General Assembly Hall, who included several party leaders and candidates as well as some of his media colleagues.

The video was accompanied by an instrumental version of Frank Sinatra’s classic “I did it my way” – a song that aptly encapsulated Allen Jr. approach to living life to the fullest.