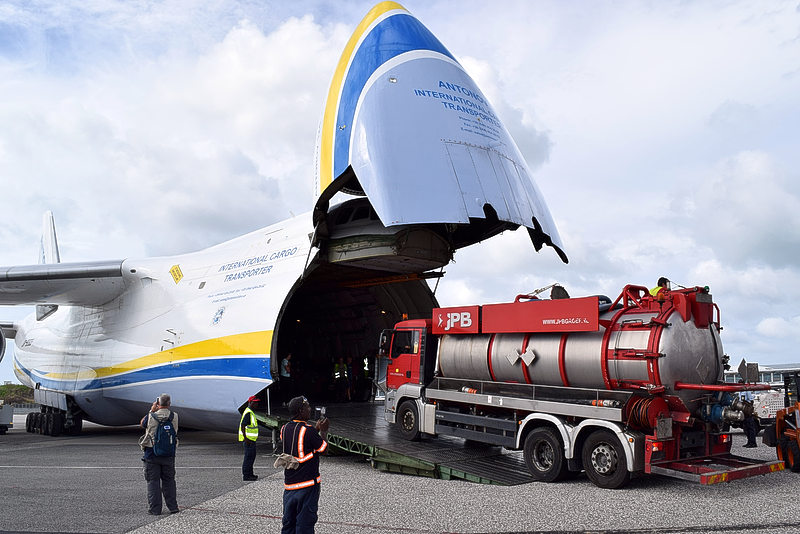 AIRPORT–Princess Juliana International Airport (PJIA) continues to tick off firsts even in her partially operational state. An Antonov Airlines cargo plane delivering clean-up and recovery supplies from the Netherlands touched down on Saturday afternoon.

The behemoth towered over all other aircrafts at the airport and inspired awe in onlookers when her nose lifted up for offloading of cargo in her hold.
In the “belly” was a “waste train.” This is not an actual piece of equipment. It is a collective of heavy equipment and chemicals to disinfect high priority areas – schools, Government buildings and the landfill.
A waste train is a concept in which sequentially sweepers, small excavators, a dump truck and a spray lance vehicle run after each other to carry out specific waste operations. The expectation is that the “waste train” will be fully operational next week.
Combatting the flies plaguing the country is high on the priority list. A specialised truck – spray lance – was among the cargo that can be used for the collection of sewage and to spray the landfill with chemicals to cull the explosion of flies. Backpacks and safety gear needed to disinfect public areas and large brooms were also included in the shipment.
A waste train expert will train the workforce to use the spray lance vehicle.
Routes will be explored to ensure a fast and effective use of the waste train when all parts are in place.
A large part of the “waste train” was on board the Antonov. The remaining materials are on a ship sailing from Curaçao to St. Maarten.
The materials were sent to the country by the Dutch Ministries of Interior Affairs and Kingdom Relations BZK and Infrastructure and Environment at the request of Ministry of Public Housing, Spatial Planning, Environment and Infrastructure VROMI Minister Christophe Emmanuel.
The request processed via the Dutch Civil Mission, headed by Erwin Arkenbout, also included two large garbage trucks. Those were delivered a week ago aboard MV Aniek from Curaçao. The trucks were flown into Curaçao in the hold of an Antonov plane.
After leaving St. Maarten, the cargo plane ended up parked indefinitely on the side of the runway at V.C. Bird International Airport in Antigua. The unscheduled stayover is due to an accident that occurred on Saturday while the plane was taxiing to park.
Reports from Antigua suggest that the cargo plane clipped one of its wings on a light pole as it turned to park. The damage appears to be quite significant. Efforts were made, unsuccessfully, to repair the damage.