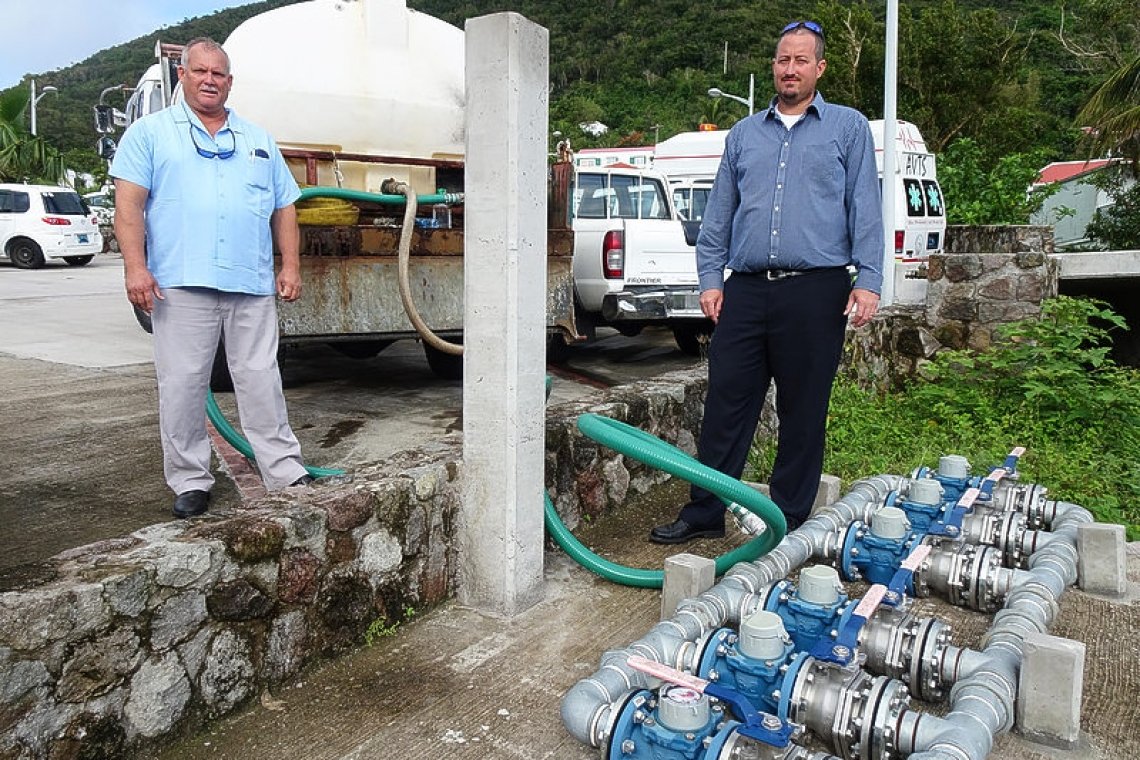 SABA–The water filling station in Windwardside has become operational. This means that water trucks can now fill up at this location to supply water to the villages of Windwardside and Hell’s Gate instead of having to fill up in The Bottom and make the drive uphill.

The new Windwardside station is similar to the first one in The Bottom which became operational in 2018 and is part of the larger water project funded by the Ministry of Infrastructure and Water Management to install a waterpipe system in Saba and to make quality water accessible and affordable for residents.

The new filling station is located at the big parking lot in Windwardside. The parking lot has a very large cistern underneath, divided into three compartments.

Under the supervision of the Planning Bureau of the public entity Saba, one compartment has been thoroughly cleaned and sealed off so it can store water.

The price per truckload of water is US $60, which is kept at this level through a subsidy of the public entity, so the water remains affordable.

The waterpipe was extended to Windwardside early 2019. The works included the construction of a cistern and pumping station next to Lollipop’s, which was officially opened by Minister of Infrastructure and Water Management Cora van Nieuwenhuizen and Commissioner Bruce Zagers early May 2019.

The extended waterpipe will bring water to the cistern underneath the parking lot via an automated system whereby the flow comes into Windwardside in a controlled manner.

The processed water from the reverse osmosis (RO) plant in Fort Bay comes up to Windwardside through an ingenious system of cisterns and pump stations at different locations.

In the first phase the pipeline was installed from Fort Bay to The Bottom, along with the pump stations there and the cistern in the Range and the filling station in The Bottom.

The second phase to further transport the water closer to the people consisted of extending the pipeline to Windwardside and pumping the water via the pumphouse at Lollipop’s.

At Lollipop’s there are two pumps: one pumps the water to Windwardside and the other pumps it to the new water bottling plant which should become operational by mid-year.

Five larger businesses in Windwardside are already connected to the pipeline. Water meters have been installed at Breadline Plaza, Juliana’s Hotel, Unique Supermarket, Scout’s Place and the Cottage Club.

“When they need water, we switch on the pump at Lollipop’s, manually open the valve and they get water to fill their cistern,” said Head of the Planning Bureau Bobby Zagers.

The renewed water plant upstairs in the concrete building at Fort Bay, operational since June 2019, produces some 35,000 gallons water per day. So far, more than 7.4 million gallons of water has been pumped from the Fort Bay plant to The Bottom and Windwardside over a period of approximately two years.

The water project is considered a highly successful one, whereby the cost of water has been reduced dramatically. “We thank the Dutch government and the Ministry of Infrastructure and Water Management, and also Vitens Evides for their assistance,” said Commissioner Zagers.

The RO water supplied via the pipeline system is not considered drinking water. For the supply of good quality, affordable drinking water on Saba, the ministry is supporting the public entity with another water project, which is the installation of a drinking water bottling plant. This plant is expected to be operational before mid-year.