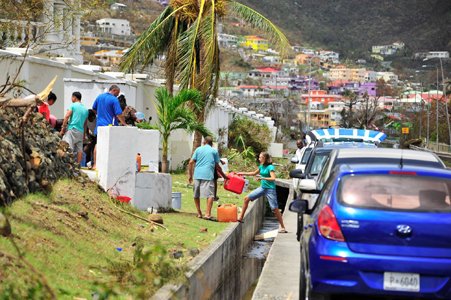 SOUTH REWARD–Potable water shortage around the country has caused turmoil in neighbourhoods leading to the intervention of Police and the Military to end brawls between gangs who blocked access to people who wanted water from the public wells.

One man demanded money from people seeking water from a cistern. He was attacked by neighbours. Police had to be called in to control the situation.
Water trucks from utilities company GEBE have been moving through some districts as of Friday delivering water.
The water deliveries are not sufficient for the dire needs of residents. This has led to long lines at wells to get water for cleaning up.
Drinking water has been flown in from overseas to St. Maarten, but distribution is expected to commence after Hurricane Jose. The exact distribution details are not available at present.
Meanwhile, reports from St. Martin indicate that food and water have been distributed to some residents by the French military.