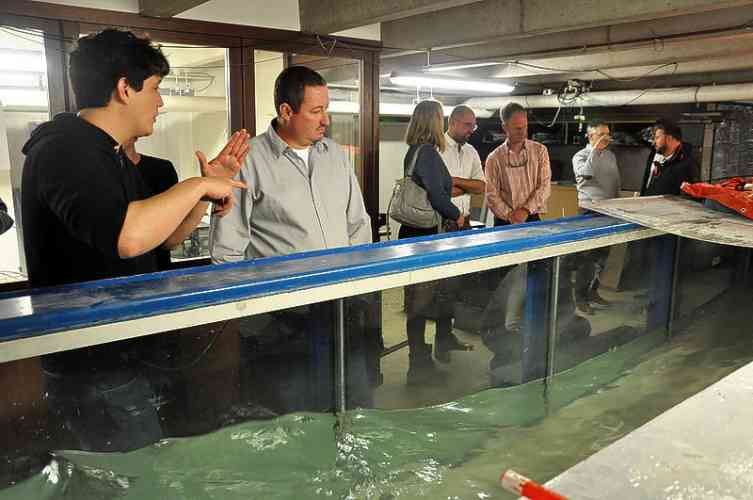 Saba Commissioner Bruce Zagers (second from left) receives an explanation by a team member of Ghent University’s Department of Civil Engineering about the workings of the wave simulator and the testing being performed.

SABA/GHENT–A delegation of the Public Entity Saba visited Ghent University in Belgium on Monday for the wave simulator tests in preparation of the Fort Bay harbour project.

Saba has embarked on an extensive project to reconstruct, renew and expand its harbour. The Dutch government has made a total amount of 27.5 million euros available for this project which involves the construction of a new, larger pier further west from the location of the current small pier, the extension of the current main pier and improvements at the shoreline and on-land infrastructure. The scope of the project contains three main elements: the upgrading and expansion of the harbour, making the harbour hurricane proof and increasing economic activities.

Following a competitive tender process between five hydraulic-modelling institutes, the Saba government awarded the contract to Ghent University in February this year to perform various tests in its physical modelling facilities. The test results are important in the preparation process of the close to 30-million-euro harbour project.

The team of Ghent University, headed by professor Peter Troch, carried out a range of tests in the wave simulator which measures 30 metres in length, one metre in width and 1.2 metres in height. The tested parameters are the wave reflection and overtopping under normal operations and the wave-impact loading under hurricane conditions.

Scaled models of the preliminary vertical wall design for the primary and secondary breakwater were constructed in the wave flume to create a realistic representation of the structural performance under normal and during hurricane conditions.

The Department of Civil Engineering carried out 38 tests in total so far, fine-tuning the height and geometry of the structures to create a safe and robust design. Worst-case scenario testing was performed on the wave simulator to check how the design responded to very heavy hurricane conditions. For this testing, the simulator’s wave maker was turned up to maximum capacity.

The testing has been underway for over three weeks now and is expected to last another few weeks, including data analysis and reporting. Contractors participating in the prequalification process can make use of the data.

The visit of the Saba delegation to Ghent was part of a packed programme which involved meetings with all ministries in The Hague as well as meetings with members of the First and Second Chambers of the Dutch Parliament.

The harbour project was one of the topics discussed in several of these meetings. The prequalification for the contractors starts in the next few months. Procurement will take place according to World Bank guidelines.