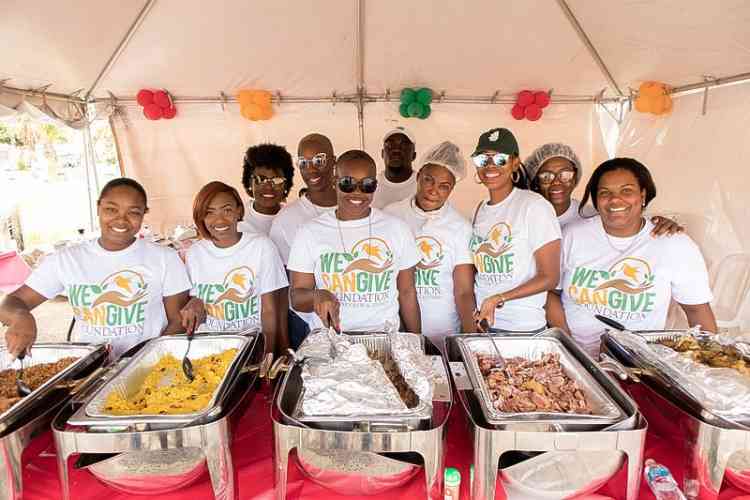 Volunteers at We Can Give Foundation’s free Christmas Lunch at the Princess Port de Plaisance Resort parking lot on December 25.

COLE BAY–We Can Give Foundation hosted a free Christmas Lunch at the Princess Port de Plaisance Resort parking lot on December 25, 2017, with donations made by local businesses and individuals.

Online and radio promotion for the Christmas lunch started early in December. Foundation President Skelet of Red Eye Crew and Vice-President Kysha Brooks informed the community of their intention to host their annual Christmas lunch on December 25.

“Almost every company we reached out to responded positively making it possible for us to provide 500-plus hot meals. There was so much food that we were also able to deliver meals to the 60 families in the Festival Village as well as those living at the Nina Duverly school in Marigot,” Skelet said.

“This project has been in the pipeline for quite some time. We decided that this year more than any other was the time to bring it to reality. So many people spend Christmas Day alone, or are not able to celebrate like everyone else for diverse reasons. We just wanted to do our part and make this day a little brighter for them,” said Brooks in a statement on Thursday.

Volunteers, including students of Charlotte Brookson Academy, gathered at the Princess Port de Plaisance Resort parking lot from 8:00am to set up tents, chairs, tables, gifts and the buffet, all donated by local businesses and individuals.

They said they had collaborated with Tous pour la Caraïbe in October and brought in a container of relief goods from Guadeloupe. These goods were distributed via local associations to various areas of the island on both the French and Dutch sides.

We Can Give Foundation thanked the radio stations for opening their airwaves allowing them to get the word out, the volunteers who gave of their time on Christmas Day, all caterers and individuals who contributed to the buffet and businesses for their donations.