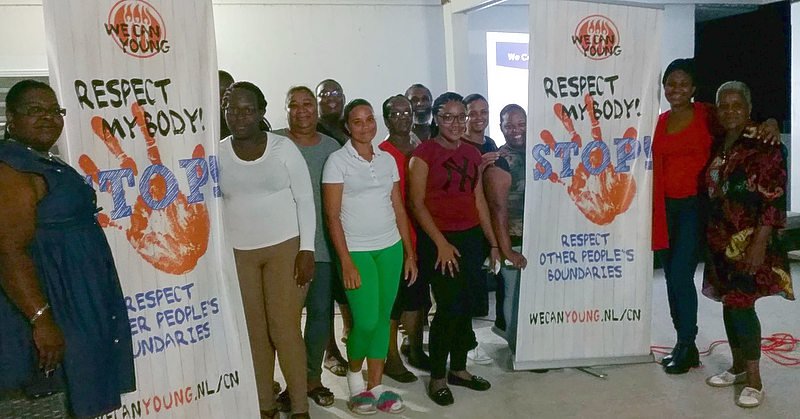 We Can Young (WCY) coordinator Shanna Mercera-Gibbs (left) with teachers of Mega-D Youth Foundation and Daughters of the King Foundation.

The new Core Team which consists of T-Rassia Redan (DOTK), Ursula Lopes (MYF) and Shanna Mercera-Gibbs of Department of Public Health GGD found it important to get teachers from both organizations involved in implementing the We Can Young Project within their organizations.

We Can is a global campaign to combat inequality between men and women and to stop violence against women. The campaign started in 2004 in Bangladesh.

Since March 2009, the We Can campaign also started in the Netherlands. From 2011, We Can started a campaign especially for young people with the name We Can Young.

In 2015, We Can Young was introduced to the Caribbean Netherlands and a branch was opened on each of the islands. On March 2016, the We Can Young project was launched in St. Eustatius.

“It is a campaign with a clear objective that young people should treat each other respectfully and to be aware of limits when it comes to sex and relationships,” Mercera-Gibbs said.

Much focus will be placed on gender equality, abuse, norms and values, peer education, stereotypical images and more, she said. “The campaign aims to encourage young people to think and have positive debates.”

The goal of the We Can Young campaign in the Caribbean Netherlands is to enhance the resilience of boys and girls regarding sex and relationships, Mercera-Gibbs said. “It aims to achieve respect and teaches young people to be conscious of boundaries.”

The We Can Young Core Team Statia plans to have more trainings in place for the teachers, parents and youths on St. Eustatius.