Home Headlines & Top Stories ‘We just have to have patience,’ say new businesses in Marigot |... 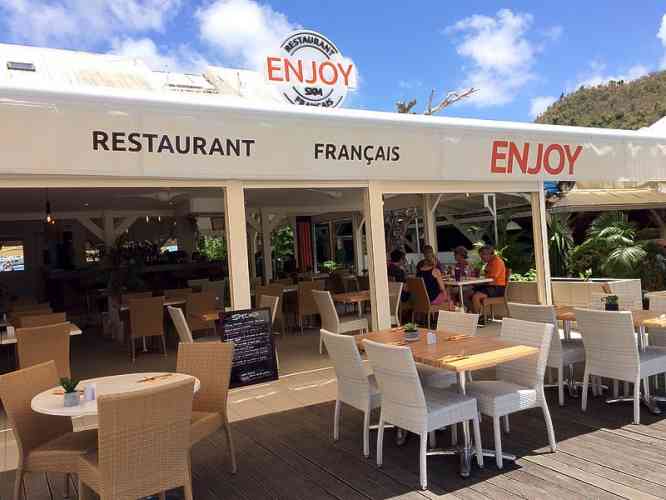 MARIGOT–A year and seven months after Hurricane Irma, there are welcome signs on buildings lining the main streets of Marigot, undergoing repair work and shops and businesses formerly shuttered are reopening. But the glacial pace of reconstruction means the town centre still has a long way to go to regain its former vibrancy and exclusivity.

Not everyone is despondent over slow progress. While there has been a trend to defect to the Dutch side and start a business, there are still those who are firm believers in the future of Marigot. For those who have lost faith and leave there seems to be an equal number of newcomers willing to invest and give it a go.

Some 10 new businesses have opened in Marigot in the last few months, mostly upscale clothes and furniture shops, and restaurants. Mersea, Billabong, restaurants Enjoy and Ginette, Sunset Boulevard, Thana Addiction, Vou Deco, La Maison, and Carmen C are the ones that come to mind.

It’s no coincidence that some of these new businesses are opening close to Marina Port La Royale, anticipating that the marina will once again be the heartbeat of Marigot.

Repairs have only just started on the wooden decking on the docks – a direct result of the materials being delayed, the Collectivité explained. Nevertheless, it gives businesses in the marina a glimmer of hope that something is finally happening.

Interior designers Eric Stievenard and his wife relocated from France to St. Martin to open their home décor shop La Maison in the Plaza Caraibes, Rue Kennedy, on October 1, 2018. They have another shop in France. La Maison specializes in European brands and orders can be done online from a catalogue as well.

“We had been coming to St. Martin for 15 years but finally decided to live here,” he explained. “We feel very optimistic about the recovery. It is starting to move in the right direction now. We are confident in the tourists coming back.”

Asked if he was not put off by high taxes and social charges on the French side, which have hurt businesses before, he replied: “No, if you want good roads and public services you have to pay taxes. To me it’s normal.”

“It’s been slow from the tourist point of view, but we have been catering to the locals,” said Iris. Her store was formerly on the Boulevard in Grand Case before Hurricane Irma. Marigot is not necessarily a better location, she explained, but the clients are different.

“I think Marigot will be good in the end. We just need time and patience,” she added. “Once the marina gets life back again and restaurants are busy it’s better for all of us. But it’s not so bad at the moment.”

A few doors down on Rue Kennedy is newly opened Billabong, a swim wear and surf-style shop which is the sister store to Quiksilver in Hope Estate. And, after that opposite Goldfinger is Le 12 Kennedy Street, a new lifestyle clothing boutique for men, which opened in December 2018.

“I decided to open in Marigot because I am confident in the future,” said proprietor of Le 12 Kennedy Street who arrived from France in August 2018. “Marigot is a beautiful town that needs a boost. Yes, the work on the marina is going to take some time but I think it’s worth the wait, even if it’s another year.”

The boutique is described as a concept store and specializes in French brands, as well as unusual and quirky ones. “Americans and Canadians like what we have because it’s different and not something you find everywhere,” he added.

Enjoy (formerly Le Galion) is a new restaurant that recently opened on the marina next to Main a La Pate, enjoying a prime position on the water, joining Be Kool on the other side which opened where Le Chantclair once was. The 50 to 60-seater restaurant is open Monday to Friday for lunch and dinner.

“We opened here a month ago,” disclosed the co-owner of Enjoy, a resident for 15 years. “We bought the place and fixed it up. It hasn’t been easy but now they are fixing the decks so it’s much better and safer for the customers. We are confident tourists are going to come back to this marina and hotels will reopen. For now, it is still a bit slow.”

Enjoy owners also had Ocean 82 and Le Tastevin on the water side of the Boulevard in Grand Case. Both were destroyed during Hurricane Irma. They disclosed Ocean 82 will re-open this July.

Be Kool Restaurant and bakery Sarafina’s are also hoping business will improve but once again it depends on the reconstruction of the marina. Sarafina is still waiting for a building permit submitted in September 2018, to open its patisserie and restaurant next door so it can offer a full service, as it used to do on the waterfront before the hurricanes.

“It’s still slow,” said a server at Sarafina’s. “Even January, February, March wasn’t that busy. They have to fix up the marina. They were supposed to start in January but they are only starting now and working at a snail’s pace. And they have to do something about the car park. I had a guy banging on my car window one day. Since then I don’t park there anymore.”